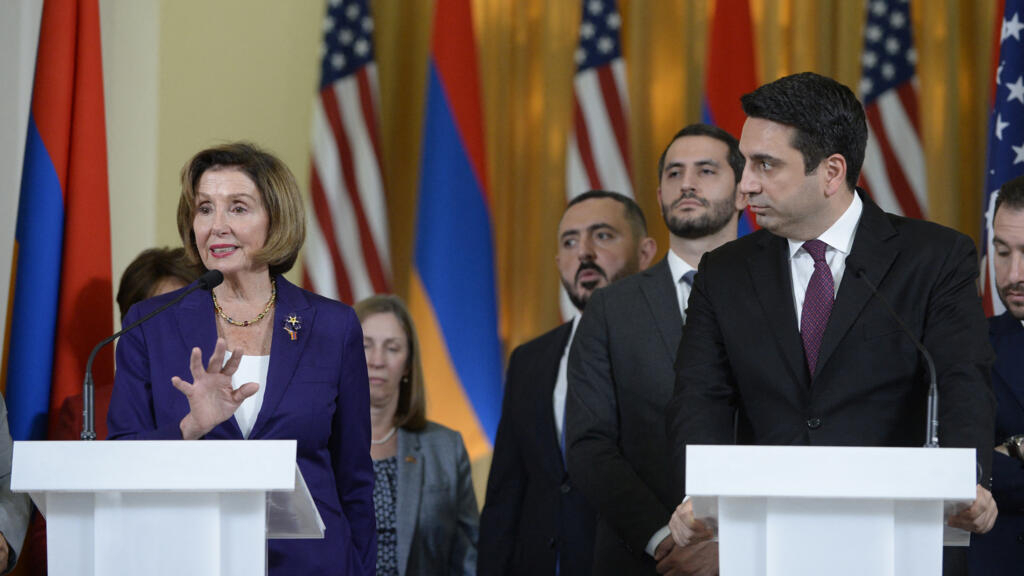 Azerbaijan on Sunday condemned House Speaker Nancy Pelosi for saying Baku had started a border dispute with Armenia during her visit to Yerevan. Pelosi’s comments that Azerbaijan had carried out an “illegal” attack on Armenia’s sovereignty was “baseless and unfair” and dealt a serious blow to peace efforts, Azerbaijan said.

“Pelosi’s baseless and unfair accusations against Azerbaijan are unacceptable,” Azerbaijan’s foreign ministry said in a statement. “Pelosi is known as a pro-Armenian politician,” the statement added.

“This is a serious blow to efforts to normalize relations between Armenia and Azerbaijan,” the foreign ministry said.

Azerbaijan reiterated its position that the recent fighting was the result of “a large-scale military provocation” by Armenia, a story rejected by Yerevan.

Earlier Sunday, Pelosi condemned what she described as an “illegal” attack by Azerbaijan on Armenia, which was responsible for the worst fighting since their 2020 war.

ALSO READ  Soldier who went missing during the Korean War

Baku and Yerevan have accused each other of triggering the border clashes on Tuesday, which killed more than 200 people.

“We strongly condemn those attacks – on behalf of Congress – that threaten (the) prospects of the much-needed peace agreement,” Pelosi told a news conference in Yerevan.

“Armenia is of particular importance to us because of its focus on security following an illegal and deadly attack by Azerbaijan on Armenian territory.”

Pelosi said the attack was an “attack on (the) sovereignty of Armenia”.

Previous attempts by Russia to broker a ceasefire have failed.

“We are grateful to the United States for the agreement on the fragile ceasefire that has been reached through their mediation,” he told a news conference with Pelosi.

Simonyan thanked the US for “the focused assessment of (sic) Azerbaijan’s war actions”.

Pelosi, who arrived in Yerevan on Saturday for a three-day visit, is the most senior US official to travel to Armenia since the small country gained independence from the Soviet Union in 1991.

Armenia and Azerbaijan have fought two wars – in the 1990s and in 2020 – over the disputed Nagorno-Karabakh region, an Armenian-populated enclave of Azerbaijan.

Along with France and Russia, the US co-chairs the Minsk Group of Mediators, which had led decades of peace talks between Baku and Yerevan under the auspices of the Organization for Security and Co-operation in Europe.

Analysts have said the recent fighting has largely negated Western efforts to bring Baku and Yerevan closer to a peace deal.

The six-week war in 2020 claimed the lives of more than 6,500 troops from both sides and ended with a Russian-brokered ceasefire.

Under the deal, Armenia ceded parts of territory it had controlled for decades, and Moscow deployed about 2,000 Russian peacekeepers to oversee the fragile ceasefire.

Ethnic Armenian separatists in Nagorno-Karabakh broke away from Azerbaijan when the Soviet Union collapsed in 1991. The ensuing conflict claimed about 30,000 lives.