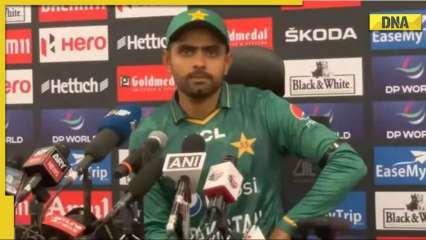 Pakistan captain Babar Azam is struggling off the pitch as his alleged private chats and videos with a woman, who is rumored to be the girlfriend of a Pakistani cricketer, went viral on social media on Monday.

The authenticity of these chats and videos cannot be determined, but it wouldn’t be wrong to say that they caused a storm on the internet and many said the leaked content was real. But many claim that these videos and chats are fake and leaked on social media to damage Babar Azam’s image.

Amidst all the buzz, Babar took to Twitter and Instagram and posted a photo of him with a caption, “It doesn’t take too much to be happy.”

It doesn’t take much to be happy pic.twitter.com/udKmZTHl6V

According to reports, the Pakistan Cricket Board is planning to sack Babar as captain of the Test side after Pakistan’s lackluster showing in the Test under his captaincy.

“Cricket is my blood and I watch cricket matches and read about cricket all the time. And from what I see, Babar Azam’s position in the team is being weakened,” Misbah told reporters in Lahore on Tuesday.