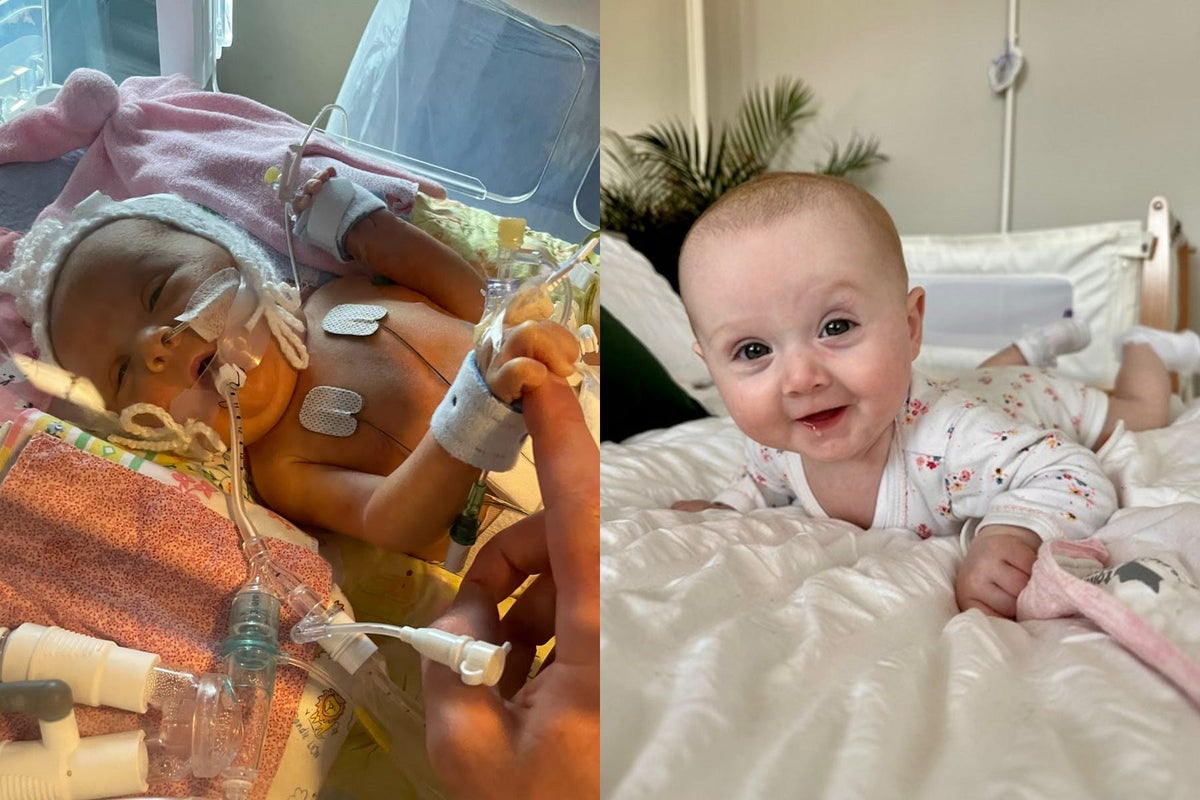 A premature baby who was expected to die a few hours after birth when surgeons discovered she had a dead gut has made a full recovery against all odds, with her mother saying: “We have cried tears of happiness ever since”.

When Deborah La Spina, 36, a marketing specialist from Sutton, London, gave birth everything seemed normal – but after a few hours her baby, Connie, now six months old, started vomiting, had to be resuscitated and was rushed to the nearest hospital . children’s hospital.

ALSO READ  What is a polar vortex and what does it mean for UK weather?

The hospital, St George’s, was the only one in the UK that could carry out an emergency procedure that would save Connie’s life.

After “being in the right place at the right time”, Deborah and her husband Dominic’s journey with Connie didn’t get any easier – after multiple surgeries, IV feedings and three months in hospital.

Before Connie was born, prenatal scans revealed she had an abdominal cyst, which Deborah and Dominic were told not to worry about – little did they know it would turn out to be life-threatening.

Connie was born a month early, on July 27, 2022, at St Helier Hospital, London – everything looked great and her parents were thrilled with their new arrival.

Deborah said: “The examiner told me the cyst has not caused her any problems so I was extremely relieved and breastfed her and she fed beautifully.

“But within a few minutes she started vomiting – that’s when I knew something was terribly wrong.”

A few hours later, Connie went to St George’s, a specialist children’s hospital in London, with a blue light after she continued to vomit and had to be resuscitated.

Deborah explained: “Then they said she had some kind of intestinal blockage.

“I didn’t know how bad it was until they did some scans and said they needed immediate surgery to remove a small piece of bowel.

“They said everything should be fine and we’ll be home in a few weeks.

“So we waved our daughter, who was only hours old, to the theater and hoped for the best.

“I had just given birth, so I didn’t really know what was going on. I trusted that the doctors knew what they were doing.”

After nearly five hours, Connie’s surgery was over.

Deborah explained: “The surgeons came back looking genuinely shocked. They looked like they had seen a ghost.

“They explained that things were much worse than they expected and that her bowel had twisted, cutting off the blood supply.

“We were told that most of Connie’s gut was dead and incompatible with life. We were terrified.

“I waited for the news that they told me everything would be fine, but that punchline never came.”

The surgeons explained to Deborah and Dominic that the surgery they were performing was unconventional, that St. George’s was the only hospital that could do it, and that they didn’t want to give up on Connie.

Deborah said: “The risk was high and the odds were low. Even if the surgery worked, her quality of life would be very questionable.

“They tried something they wouldn’t have if they didn’t think there was any hope.

“So even though we were deeply shocked, saddened and terrified, we had something to hold on to and they didn’t tell us this was the end.

“So we just clung to that for life.”

As the days passed, there was progress – Connie went off her medication and ventilator and was transferred from intensive care to the high dependency unit, where she received parenteral nutrition through an IV.

Deborah said: “Miraculously she was only in intensive care for a week. After the surgery, we were told that seven days was a critical period, and if it didn’t go according to plan, she would die.”

Connie improved over the next week and the doctors were able to teach her how to accept milk, and did so by giving it directly through her stomach.

Six weeks later, she underwent another procedure to remove the tube holding her intestine together — which Deborah said was “the real test to see if everything had worked.”

After things looked better, Connie started vomiting again just a week later, so she underwent another surgery to remove even more of her bowel.

Deborah said: “It was scary because she was doing so well. I was very nervous, and when she started vomiting, my heart just sank. It was very, very tough.

“It was also difficult for Dominic, he tried to stay positive, I think for me.

“We had to remember that at this stage it was still more about quality of life than her actual life.”

The surgery was successful and revealed that Connie had new intestines, meaning she could be fed orally.

Deborah explained: “She had recovered better than anyone expected.

“The surgeons came out with a smile on their face.

“Instead of her needing parenteral nutrition for years to support her growth and nutrient absorption, we were looking at maybe six to 12 months. So that was a big deal.”

A few days later, after three months of Connie in the hospital and “emotional hell”, Deborah and Dominic were finally able to take Connie home.

Deborah said, “We visualized that day every day.

“When you find out you are pregnant, visualize walking out of the hospital with the car seat in your hand and looking at the man at the door of the hospital.

“It was very different from when I walked her from St. Helier in an incubator and an ambulance.

“So when we finally walked out of the hospital and put her in the car, we just looked at each other and breathed a sigh of relief — we made it, we got through the toughest, most challenging time.” of our lives.

Deborah explained how grateful she was for the team at St George’s, saying: “We couldn’t believe our luck to come across this team that is able to heal our very sick little baby.

“I think we’ve cried tears of happiness ever since.”

Deborah and Dominic took Connie home for Halloween in 2022, without any parenteral nutrition, and welcomed by their loved ones.

She said: “We were driving the car and Connie’s sister, Peigi, came running out.

“We were finally a family of four, we could all start our lives together.

“Our lives were essentially torn apart because we were in the hospital so much.

“It was the biggest relief and we are so thankful for our miracle baby.”