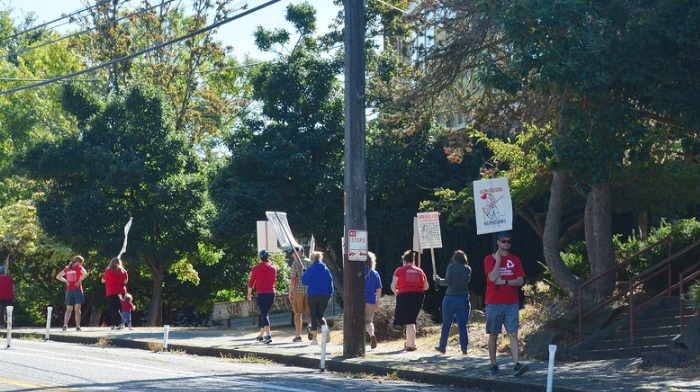 Parents across the country have been counting down the days to the start of a new school year. Hopes were high that after two years of virtual learning, mask and vaccine mandates, and curriculum battles about social and gender ideology, we would return to normal.

Unfortunately, some districts didn’t have the perfect first day of school. As a result, some students don’t even have had their first real day of school.

This year instead of a pandemic ending the school year, teacher unions are the bump on the educational road. Many have gone to the picket line demanding various adjustments to their contracts and changes to their schools.

95% of teachers union members voted in favor of the strike.

Seattle’s public schools have a budget of over $30,000 per student this school year

Give that money directly to families so they can find alternatives. pic.twitter.com/LHis3jqZZa

Still waiting for school to start

The Seattle Education Association (SEA) has been on strike since Sept. 7, with students still out of class. The teachers’ union and the Seattle Public Schools have reached a tentative agreement. However, Seattle parents still don’t know when the school year starts as they enter their fifth day of school at home.

The strike has hit nearly 50,000 students in Seattle eager to go back to school. However, the effect on parents who undoubtedly also looked forward to school-age children is often missed in the coverage.

The SEA said their main concerns were to increase the academic and emotional support of students, especially those with special needs. But don’t think it doesn’t include pay.

The Seattle Public School board offered a 1.1% increase over the state-imposed 5.5% cost-of-living adjustment, which the SEA promptly rejected. Unsurprisingly, SEA’s other request involves the dreaded D-word: Diversity.

The teachers in Seattle are likely to go on strike tomorrow morning (on the first day of school). This is 100% about money.

Remind me that all teachers are heroes, again, will you?

“The staff should represent the students in the school. That’s the biggest. Children need to see teachers who are like them. They must have books that represent who they are.”

Perhaps Seattle will adopt the same policies as Minneapolis and modify its hiring and firing procedures to include a racial component.

While I’m not a fan of increasing diversity initiatives in schools, there are some teacher unions that have gone on strike this year for arguably good reasons. Earlier, the Columbus, Ohio teachers’ union went on strike, making the first week of the school year virtual.

In addition to an 8% pay increase, the Columbus teachers’ union demanded commitments to improve heating and air conditioning in dilapidated buildings and for smaller classes. In general, although parents in Columbus were not satisfied with the virtual learning the first week, they supported what the teachers asked for.

As parent Kelley Freeman put it, her son:

“…deserves teachers who are paid fair wages and who have safe and healthy classrooms with heating and air conditioning and no black mold.”

Regina Fuentes, the spokesperson for the Columbus Education Association, said after an agreement was made:

“Let the history books reflect that this strike was about students who earned a dedication to a modern school with heating and air conditioning, smaller class sizes and a well-rounded curriculum that includes art, music and gym.”

Seems like a reasonable request to me. Hard to believe teachers would have to go on strike to get heating and air conditioning in their schools, with all that stimulus money pouring into the school districts.

This is not a radical view. It is enshrined in the laws of many states.

Let the Seattle teachers’ union negotiate anything they want.

But to deprive children in Seattle of their first normal September since 2019 is unscrupulous.

Where has the money gone?

The stimulus money in the US bailout, which was widely celebrated (at least by Democrats), included $122 billion for school districts across the country. So far, just over $15.4 billion has been spent, 12% of the total.

Another Washington state teachers’ union chose to go on strike to be heard. Ridgefield Education Association co-chair Elizabeth Stamp said of their strike:

“None of us want to go on strike, but ignoring our dysfunctional intervention program, unsafe staffing and the need for more counselors when the district has the money to do something about it is unacceptable.”

It seems odd that these school districts that complained about the cost of getting schools safe and ready to reopen don’t seem to be spending the money to do just that. But again, in most cases it is not the teachers that are the problem, but the administrators and elected bureaucrats who seem to be the problem.

I dug into the salaries of Seattle Public School teachers because they claim they are so underpaid they went on strike.

I selected at random and found 6 figure salaries plus benefits with 12-15 weeks of vacation. I assume those numbers have only increased since 2019-20 pic.twitter.com/SUHgPGhNKu

Who suffers the most?

As usual, it’s the children and parents who suffer the most. The recent National Report Card preview shows that two years of school closures and distance learning set American children back 20 years.

There has been little discussion by the national teacher unions or the Biden administration about how specifically the public school system seeks to compensate for this learning loss. Interestingly, the Seattle Education Association, the same one that has been on strike in the name of diversity since the start of the school year, fought a return to personal education during the pandemic.

Their claim; it was dangerous for the teachers and the students.

Test scores are at the lowest level in 2 decades.

72% of schools reported a peak in chronic absenteeism.

The number of students held back has exploded.

Remember what the Democratic school closure did to your child when you voted.

So what about the money that hasn’t been spent yet? South Carolina Senator Tim Scott explains that parents:

“… now forced to watch in frustration as billions of federal education dollars sit idle, just out of reach. It’s time we handed that money over to the parents.”

The figures are clear: parents want a say in the upbringing of their children. It’s time we empowered parents and put children, not unions, first. pic.twitter.com/FNmERfktiG

If only, I’m sure most parents would choose to pay and hire more quality educators and modernize the institutions they trust in their most valuable asset; their children. Unfortunately, I think we’ll see more strikes by frustrated educators until parents are in charge of education dollars.

Peoria, Illinois, may be next, as their union just passed a vote to approve a strike. The future of public education still looks fairly bleak, and any hope of a return to normalcy for American schoolchildren and families could be a fantasy.