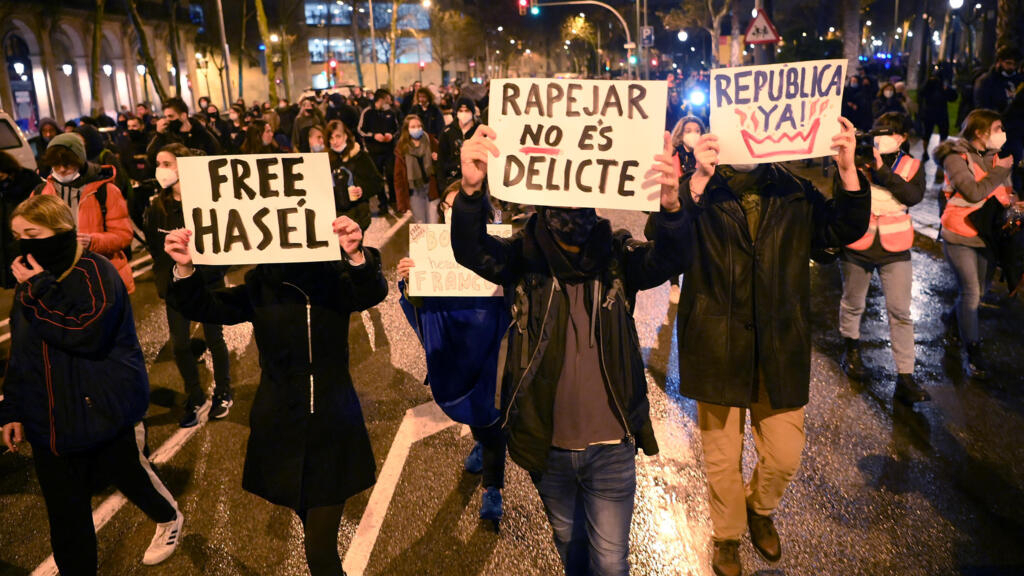 Protesters in Barcelona clashed with police on Monday for a seventh night in a row over the imprisonment of rapper Pablo Hasel.

After a peaceful rally punctuated by cries of “Freedom for Pablo Hasel”, the demonstrators marched through the heart of Barcelona to the headquarters of the national police, where some threw bottles and other objects at vehicles protecting the building, showed television footage.

The protesters then took to other streets, where they set fire to garbage cans.

“Groups of rioters set fire to the barricades … and throw objects at neighbors who complain about their attitude”, posted Monday on Twitter the Mossos d’Esquadra, the police of Catalonia.

Known for his far-left views, Hasel was sentenced to nine months in prison for tweets glorifying terrorism and videos inciting violence. The court ruling said freedom of speech cannot be used “like a ‘blank check’ to praise the perpetrators of terrorism.”

A man throws a bouquet of flowers at a national police station during a protest condemning the arrest of rap singer Pablo Hasel in Barcelona, ​​Monday February 22, 2021. pic.twitter.com/rJ3hQYbt6E

He was also fined around € 30,000 for insults, defamation and slander for tweets equating former King Juan Carlos I with a mafia boss and accusing police of torturing and killing protesters and migrants.

The rapper’s case has become a notorious cause among activists, who say jailing him is a disproportionate response and a dangerous attack on free speech.

The protests have continued since last Tuesday, when police pushed their way through barricades at the Catalan university where Hasel and his supporters were hiding to arrest him. Police say 109 protesters were detained in the area during this period.