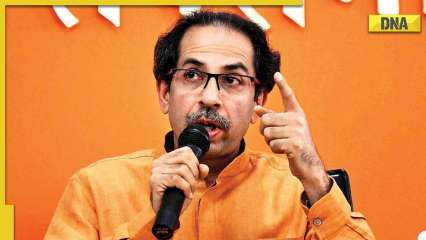 Shiv Sena President Uddhav Thackeray on Wednesday challenged the BJP to beat it in subsequent Mumbai polls, saying his party’s bond with the city was unbreakable, and also lashed out at Maharashtra Chief Minister Eknath Shinde over his rebellion and for claiming his late father’s inheritance. He also accused the Bharatiya Janata Party (BJP) of “lying” on the Rs 1.54 lakh crore Vedanta-Foxconn semiconductor project that has been shifted to Gujarat.

After the announcement last week that the joint venture semiconductor project of Indian conglomerate Vedanta and Taiwanese electronics giant Foxconn, previously set up near the city of Pune, will now take place in Gujarat, reproach has erupted in Maharashtra.

Addressing party officials in the Goregaon suburb, Thackeray said the Center is giving huge impetus to the project after it was relocated to the neighboring BJP-ruled state. He said: “The Union Home Secretary, Amit Shah, has asked his party to show the Shiv Sena its place in Mumbai’s citizen polls. I challenge you to try. Shiv Sena’s relationship with the city was unbreakable and the party was closely linked to the day-to-day life of ordinary Mumbaikars, who rush to their aid when needed.”

Thackeray asked the BJP, his former ally, to tell people what his contribution was to building the metropolis, apart from considering it a piece of real estate. The former Chief Minister attacked the BJP for targeting dynastic politics, saying, “I am proud of my family who participated in the Sanyukta (united) Maharashtra movement.” “If saving lives is corruption, we did it,” he said, referring to BJP’s allegations of corruption during the pandemic when the Shiv Sena-led coalition government was at the helm of the state.

The Sena leader said that during the coronavirus pandemic, his administration’s entire focus has been on saving patients’ lives and improving health infrastructure. “During the pandemic, when you demanded the reopening of places of worship, I focused on saving lives, improving health facilities. If that is a crime, I am ready to be punished. Kamalabai (BJP symbol of lotus) recognizes the work done during the pandemic, but others have,” he said, lashing out at his former ally.

Thackeray, who had targeted the BJP, said: “The BJP makes charges of corruption against people and then introduces them into the party fold and purges them.” “I am amazed at Prime Minister (Narendra) Modi. Has he not found anyone else to tie rakhi to his wrist than the female MP against whom his own party men had leveled allegations of corruption,” he said referring to Shiv Sena parliamentarian Bhavana Gawali, who has switched sides and joined the rebel camp led by Prime Minister Shinde.

The Supreme Court decision on Shiv Sena’s split will show whether democracy is alive in the country or not, he said. The rival Sena factions are engaged in a bitter legal battle over the party symbol and shifting parties by MLAs.

During a dig in Shinde, Thackeray said: “When I got here on the podium, I first checked if the photo of my father (Sena founder Bal Thackeray) was there. We have heard of child abduction gangs, but for the first time there is a father kidnapping gang.”

Shinde, who revolted against Uddhav Thackeray’s leadership in June and ran away with 39 party MLAs, has repeatedly claimed that his faction was the “real” Shiv Sena and that he was promoting Bal Thackeray’s Hindutva ideology.

“The Thackeray family is the Shiv Sena. How can you finish it? Don’t you dare provoke us. How can you kill so many relatives?” Thackeray asked, pointing to the party cadres gathered at the NESCO compound in a suburb of Goregaon. On the podium, a seat was reserved for Shiv Sena MP Sanjay Raut, who is currently in jail for money laundering. “He’s fighting… He won’t surrender,” said Thackeray, referring to his closest assistant. Consider the citizens’ polls in Mumbai as the first election of your life and fight it with full force, the Sena president told party officials.

“PM Modi will be in Mumbai for (campaign) for the Mumbai citizen polls, the rebel lawmaker Shiv Sena, the Union Home Secretary and central investigative agencies are there. We are waiting for this kind of battle,” he said.

Elections for Brihanmumbai Municipal Corporation (BMC), the country’s wealthiest civic body, are scheduled for the end of the year. The Shiv Sena has ruled the BMC for over two decades and the civil body is currently under an administrator appointed by the state government. The BJP, which is part of the Shinde-led government in the state, has long sought to expel the Shiv Sena from the BMC.