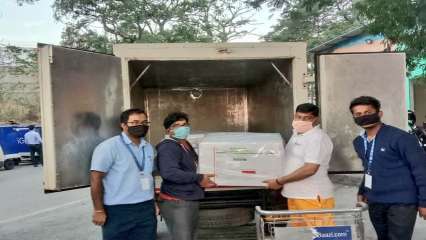 India is launching its nationwide vaccine on January 16, which will be the world’s largest vaccination campaign. About 3 lakh health workers will receive vaccines at 2,934 sites across India on the first day of the national COVID-19 vaccination campaign, official sources said. Prior to that, India has already carried out two rounds of vaccination tests to test the operational feasibility of its vaccination program.

ALSO READ  More than 1.3 Lakh names removed from the electoral roll: the government of Assam

But what catches everyone’s attention are the memes around the vaccination campaign that are making the rounds on social media. Before the campaign even began, Indians on Twitter found a fun way to make sure the vaccine reached “everyone” very quickly. A new trend even of “ putting the vaccine ” started on Wednesday, after Indians began to determine if they were “ putting the vaccine ” in certain things everyone would get it instantly.

From vada pav to rajma chawal, the answer was certain.

“Put the vaccine in Momos and see all of Delhi vaccinated,” tweeted another user.

A social media user tweeted: “Put the vaccine in ‘Rajma – Chawal’ and all of northern India get vaccinated within a week.”

A Twitter user wrote: “Put the vaccine in the pavement and all of Mumbai will be vaccinated by noon.”

“Put the #vaccine in Litti Chokha (लिट्टी चोखा) and all of the #Bihar will be vaccinated overnight,” wrote another Twitter user.

A Twitter user tweeted: “If they put the vaccine in Pan Masala, all of Kanpur will be vaccinated and the roads will be disinfected too.”

All COVID-19 vaccine doses of 1.65 crore – Covishield 1.1 crore and Covaxin 55 lakh, purchased by the Center have been allocated to all states and UTs on a pro rata basis from their agent database. health, government officials said.

Gujarat local polls will be held in 2 phases on February 21, 28 amid Covid