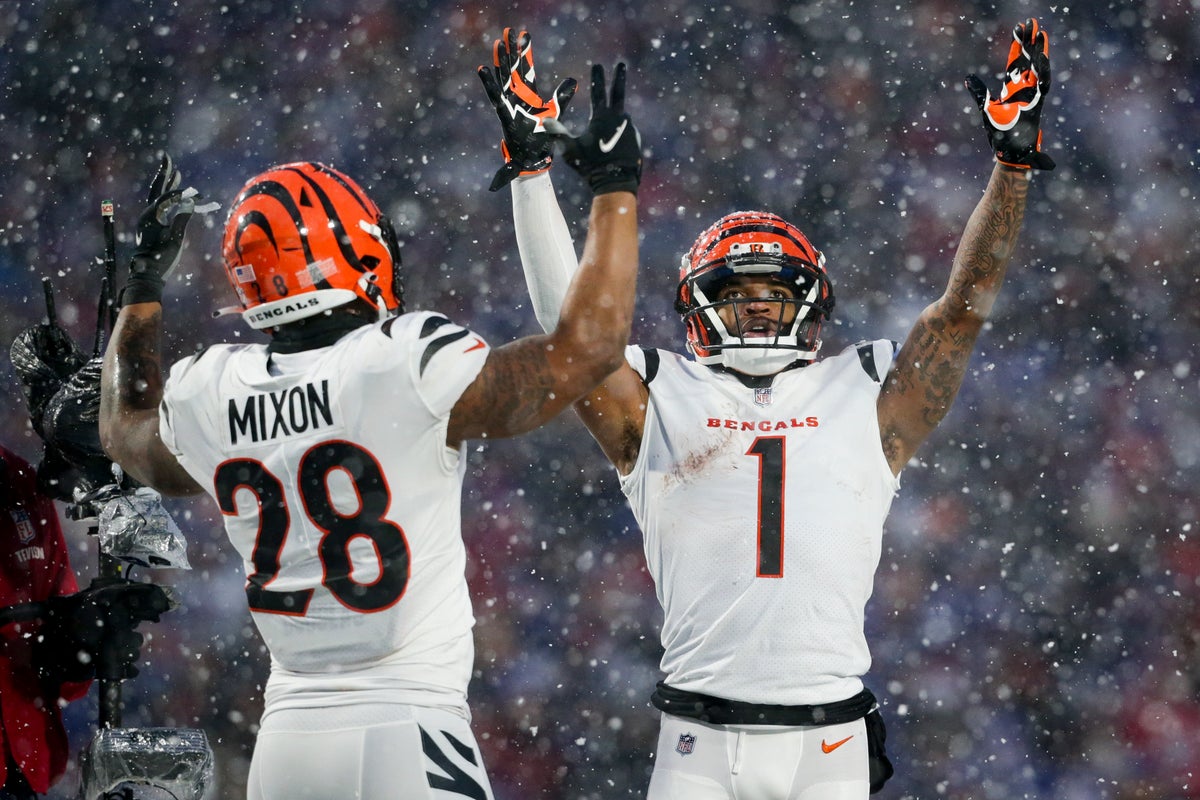 Joe Burrow threw two touchdown passes, the Cincinnati defense swarmed Buffalo quarterback Josh Allen onto a snowy field, and the Bengals advanced to their second consecutive AFC championship game with a 27-10 victory over the Bills on Sunday.

Damar Hamlin’s inspiring presence while watching the game from an end-zone suite wasn’t enough to get the Bills going in a rematch of a regular season game that was canceled on January 2 when the Bills safety went into cardiac arrest and had to be resuscitated. on the field in Cincinnati.

Instead, it was “Joe Cool” who showed poise while playing in a lingering snowfall.

Burrow completed his first nine passes for 105 yards to lead Cincinnati to a 14–0 lead after the first two possessions. Ja’Marr Chase opened the scoring with a 28-yard TD catch 3:20 into the game, followed by Burrow’s 15-yard TD throw to Hayden Hurst eight minutes later. Joe Mixon scored on a 1-yard run and Evan McPherson scored field goals from 20 and 28 yards in a game the Bengals never trailed.

The Bengals advanced to consecutive AFC Championship games for the first time in franchise history and will travel again to play the Kansas City Chiefs. The Bengals defeated the Chiefs 27-24 to advance to last year’s Super Bowl, which they lost to the Los Angeles Rams.

The Bengals have won their past three games against Kansas City, including a 27-24 win last month. The Chiefs make their fifth straight appearance in the AFC championship game after a 27-20 victory over Jacksonville on Saturday.

The Bills’ playoff run ended in the division round for a second straight season, including a 42–36 overtime loss to Kansas City the previous year.

Had Buffalo defeated Cincinnati, the AFC Championship would have been held in Atlanta next weekend, as the Bills (13-3) finished the season half a game behind the Chiefs (14-3) after their game against Cincinnati was canceled.

Bengals: Travel to Kansas City to face the Chiefs next Sunday in a rematch of last year’s AFC championship game.