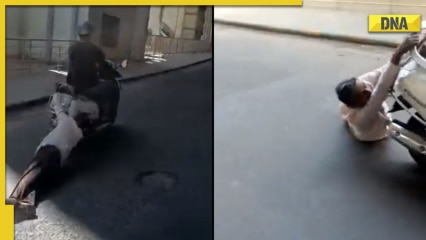 Just days after a woman was horribly dragged to death after a hit-and-run in Delhi’s Kanjhawala district, a shocking video emerged of an elderly man being dragged behind a scooter from the Bengaluru city of Karnataka after an accident.

Video of the shocking incident surfaced on social media, showing a 71-year-old man being dragged onto the road behind a scooter. The man was reportedly dragged about a kilometer by the two-wheeler.

The victim is currently receiving medical treatment at a city hospital. The driver of the two-wheeler has been detained by the police at PS Govindaraj Nagar: DCP West Bengaluru

While sharing the video on social media, one user claimed, “The scooter rider tried to escape and dragged the four-wheeler driver from Magadi Road toll gate to Hosahalli metro station.” Shortly after the video went viral, the police acted and arrested the driver of the scooter.

According to ANI reports, a senior official said, “The victim identified as Muttappa (71), a resident of Vijayapur district, is currently being treated at a hospital. Govindaraj Nagar Police has detained the driver of the two-wheeler.”

The video of the man being pulled by the scooter went viral just weeks after the horrific Delhi Kanjhawala case was reported, where a 20-year-old woman was dragged to death by a Maruti Baleno car in the early hours of January 1.

ALSO READ  What is a 'white card' in football and when is it shown? Everything you need to know

The woman was dragged approximately 8 miles for more than 30 minutes and suffered several serious injuries from being dragged into the road. She eventually succumbed to her injuries and all the suspects in the case were arrested.