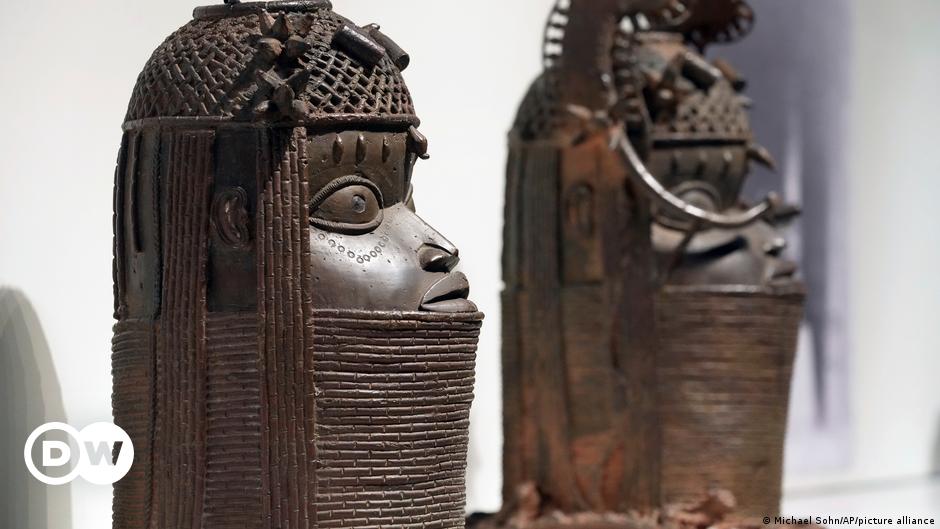 Dozens of Benin bronzes stolen in Africa during the colonial era will be put on display one last time in Berlin from Saturday before being repatriated to Nigeria.

They are on display in the new east wing of the Humboldt Forum in the German capital.

In the expansive museum, two rooms will be devoted to the art and history of the kingdom, an exhibition created ‘in close collaboration with partners in Nigeria’.

Germany and Nigeria signed an agreement earlier this year on the return of 514 objects from the famous Benin Bronzes collection.

About a third of the collection will remain on loan in Berlin for an initial period of 10 years.

Settlers have stolen on a large scale

The valuable artifacts – sculptures and reliefs made of bronze and brass, as well as works made of ivory, coral and wood – were stolen from the former Kingdom of Benin in 1897 by British colonial troops during a brutal punitive expedition.

The pre-colonial royal palace was razed to the ground and Benin City, in what is now southwestern Nigeria, was almost completely destroyed.

Thousands of bronzes, metal plates and sculptures from Benin are now scattered across Europe, but many museums have started restoring the artworks.

The exhibition in Berlin is said to contain information about the looting, while educational workshops are also planned around the exhibition.

“When it comes to colonial injustice, I think we are on the right track,” said Hermann Parzinger, chairman of the Prussian Cultural Heritage Foundation, which oversees the national museums in the German capital.

“We’re far from the end,” Parzinger added, but the museums were open to continuing the journey toward a better understanding of the past “together” with international partners.

Some Benin bronzes already on display in Nigeria

Germany has already started repatriating other artifacts to Nigeria earlier this year.

Two Benin bronzes – a 35kg head of an oba, or king and one of a rooster, were returned to Nigeria and put on display in Benin City.

Nigeria planned to build a museum in Benin City to bring the works together on their return.

Germany is not the only country to start returning stolen items. In November 2021, France returned 26 artifacts from Abomey’s royal treasures to the country of Benin, in addition to Nigeria.

Pressure is also increasing on the British Museum, which has about 700 bronze statues.