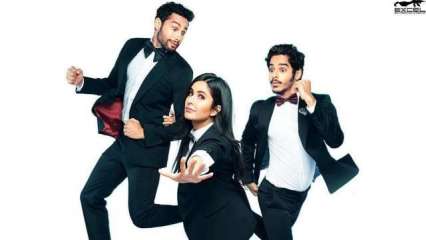 Besides other industries and the country’s economy which have been hit hard, this year has also not been a great one for the Hindi film industry. With theaters closed due to the coronavirus-induced pandemic for over six months and now after theaters have been unlocked and reopened, few theaters have shown up in theaters the year has just passed with some outputs on the big screen. However, these difficult times did not deter our filmmakers and writers from coming up with some interesting scripts and returning to filming, all set for a great next year.

While we’ve seen low budget, content-driven films do extremely well over the past couple of years, moving away from mainstream horror, Bollywood has been heating up lately at the idea of ​​serving fear with a little humor. Horror comedy as a genre is suddenly in vogue among mainstream Hindi filmmakers.

The genre has been around in the Hindi film industry for ages – the old classic ‘Bhoot Bangla’ and recent releases such as ‘Bhul Bhulaiyaa’, ‘Bhootnath’, ‘Go Goa Gone’ and ‘Stree’ come to mind when we think of horror films.

These films, however, were unique cases. What is happening now is that Bollywood filmmakers have suddenly taken an interest in the horror comedy genre in a way that it seems like the genre is here to stay. Importantly, the new crop of movies serves up the fun scares with a new-age twist and message.

Here’s a look at a few horror comedy movies that are all set to hit the silver / digitally released screens this year.

ALSO READ  `` Not many critics liked 'Laxmii', I get it: Akshay Kumar

The film stars Saif Ali Khan, Jacqueline Fernandez, Yami Gautam and Arjun Kapoor. The film, which for the first time sees the actors sharing screen space, is directed by Pawan Kripalani, who is known for having directed thrillers like “Phobia” and “Ragini MMS”. Not much is known about the film, but it is shot at various hill stations such as Dalhousie and Dharamshala.

Katrina Kaif, Siddhant Chaturvedi and Ishaan Khatter reunite in “Phone Bhoot”. It is slated for a 2021 release. The film is produced by Ritesh Sidhwani and Farhan Akhtar and directed by Gurmeet Singh. Details relating to the film are still under wraps.

This film will also see the new couple of Rajkummar Rao and Janhvi Kapoor. “RoohiAfza” also features Varun Sharma in a key role. The film, produced by Dinesh Vijan and Mrighdeep Singh Lamba and directed by debutant Hardik Mehta, also stars Varun Sharma. It is slated for release on March 20, 2020. This will be Rajkummar’s third collaboration with Dinesh Vijan after “Stree” and “Made in China”.

Akshay Kumar star “Laxmii” was released earlier this month. The horror comedy is a remake of the Tamil blockbuster “Muni 2: Kanchana”. Raghava Lawrence, who helmed the original, is also directing the Bollywood remake starring Kiara Advani, Tusshar Kapoor, Sharad Kelkar and Ashwini Kalsekar. The film received an overwhelming response among the masses.

(With contributions from IANS)

Bigg Boss 14: Did Kavita Kaushik come out of the house after a lousy fight with Rubina Dilaik for Abhinav Shukla?