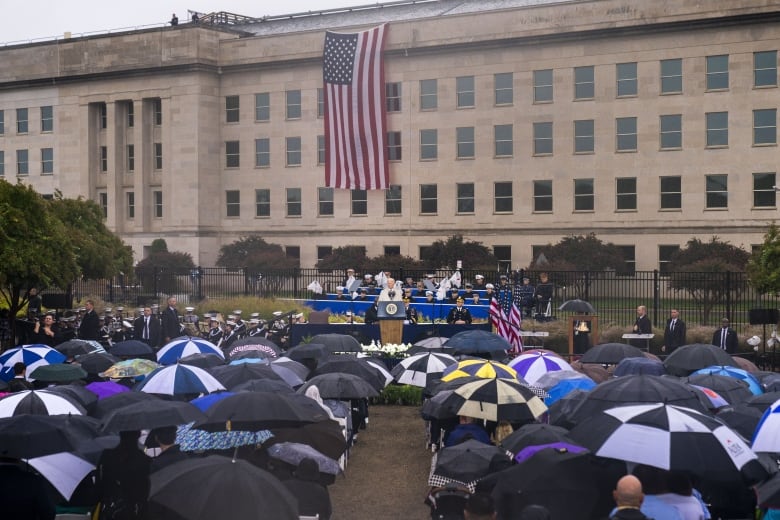 U.S. President Joe Biden celebrated the 21st anniversary of the September 11 attacks, participated in a gloomy Pentagon wreath-laying ceremony held under a persistent rain, and paid tribute to “extraordinary Americans” who gave their lives in a of the land’s darkest days.

Sunday’s ceremony took place just over a year after Biden ended the long and costly war in Afghanistan launched by the US and allies in response to the terror attacks.

Biden noted that even after the United States left Afghanistan, his administration continues to pursue those responsible for the 9/11 attacks. Last month, Biden announced that the US had killed Ayman al-Zawahri, the al-Qaeda leader who helped plan the September 11 attacks, in a clandestine operation.

“We will never forget, we will never give up,” Biden said. “Our commitment to prevent another attack on the United States is endless.”

The US president was joined by relatives of the fallen, first responders who had been at the Pentagon on the day of the attack, as well as the Department of Defense leadership for the annual moment of tribute in New York City, at the Pentagon and in Somerset. County, Pennsylvania.

In Ottawa, Prime Minister Justin Trudeau paid tribute to the nearly 3,000 victims of the attacks, including 24 Canadians, and praised the first responders.

On the 21st anniversary of the September 11 terrorist attacks, we commemorate the nearly 3,000 victims. We offer our condolences to their loved ones. And we thank those who rose that day—and in the days that followed—to protect others. https://t.co/1ZkpT96W54

“21 years ago today, the world witnessed the deadliest terrorist attacks in the history of the United States of America, our closest neighbor and ally,” Trudeau said in a statement. “We offer our condolences to the families and friends who have lost loved ones. Our thoughts are also with all those who continue to live with the pain and trauma caused by these horrific events.”

By ending the war in Afghanistan, the Democratic president fulfilled his campaign promise to bring US troops back from the longest conflict in the country. But the war ended chaotically in August 2021, when the US-backed Afghan government collapsed, a horrific bomb attack killed 170 Afghans and 13 US troops at the Kabul airport, and thousands of desperate Afghans gathered in hopes of escaping before the attack. last American cargo planes departed. The Bharat Express News Kush.

Biden quietly marked the one-year anniversary of the US withdrawal from Afghanistan late last month. He made a statement honoring the 13 US troops killed in the bombing of the Kabul airport and spoke by telephone with US veterans who aided the ongoing resettlement efforts to United States Afghans aiding the war effort.

Senate leader Mitch McConnell on Thursday criticized Biden’s approach to the end of the war, noting that the country has been in a tailspin under renewed Taliban rule since the US withdrawal.

“Now, a year after last August’s disaster, the devastating scale of the fallout from President Biden’s decision has become more acute,” said the Kentucky Republican. “Afghanistan has become a global pariah. The economy has shrunk by almost a third. Half of the population now suffers from critical levels of food insecurity.”

Biden recently warned of what he calls the “extreme ideology” of former President Donald Trump and his “MAGA Republican” supporters as a threat to American democracy. Without mentioning Trump, Biden made another call on Sunday for Americans to protect democracy.

“It’s not enough to stand up for democracy once a year or every now and then,” Biden said. “It’s something we have to do every day. So this is not just a day to remember, but a day of renewal and determination for every American in our commitment to this country, to the principles it embodies, to our democracy.” .”