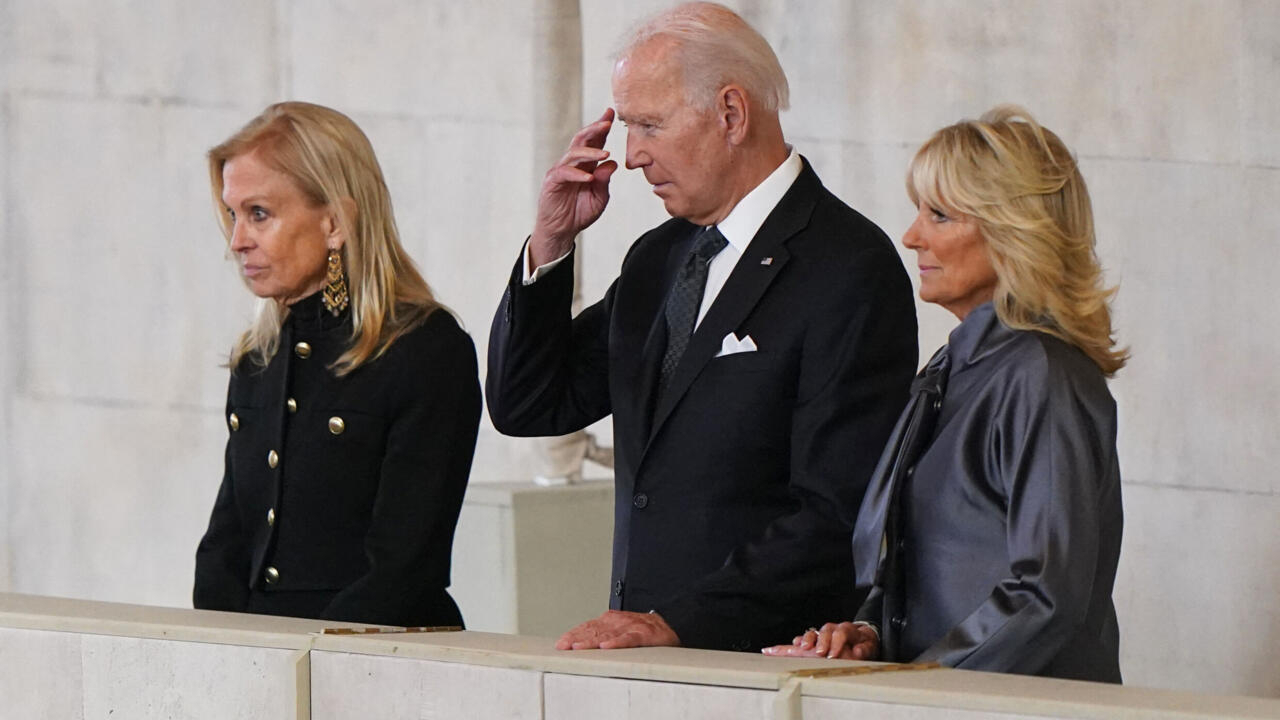 US President Joe Biden paid tribute to Queen Elizabeth on the eve of her state funeral on Sunday, when he appeared on a balcony overlooking the late British monarch’s coffin as she lay in state.

Biden is one of dozens of dignitaries and royals from across Europe, Asia, Africa and the Americas who will attend Monday’s funeral. Hundreds of thousands of people have flocked to London to pay tribute to Britain’s longest-reigning monarch, who died on September 8 at the age of 96.

Elizabeth’s body has been in state in historic Westminster Hall since Wednesday, and people from all walks of life and from across the country and overseas have queued for hours to pass her coffin in a constant, emotional stream.

As Biden sat down on the balcony next to his wife Jill, he made the sign of the cross before briefly placing his hand on his heart.

After witnessing the sombre scene, the American leader, Japanese Emperor Naruhito, French President Emmanuel Macron and other heads of state from around the world headed for a reception with King Charles III.

Biden, who arrived late on Saturday, has said the queen, who ruled a record 70 years until her death on September 8 at the age of 96, “defined an era”.

There was also a private audience at Buckingham Palace for New Zealand Prime Minister Jacinda Ardern, who, like Australia and 12 other Commonwealth realms, now considers Charles to be his sovereign.

“You could see it meant an enormous amount (to Charles) to have seen the enormity and outpouring of people’s love and affection for Her Majesty,” she told TBEN television on Sunday.

But in a sign of challenges for the new king, Ardern added that she expected New Zealand to dump the British monarchy “in the course of my life”.

Biden will join presidents, prime ministers, kings, queens and sultans representing nearly 200 countries and territories at the funeral on Monday.

French President Macron was spotted near the River Thames earlier on Sunday, mingling with those gathered in the streets around parliament.

However, Saudi Crown Prince Mohammed bin Salman is not expected to be present any longer, Reuters reported, citing an unnamed British government source. Inviting the man who, according to Western leaders, ordered the assassination of Saudi journalist Jamal Khashoggi in 2018 has been controversial. The Saudi crown prince has denied any role in the assassination.

Britain has invited heads of state or ambassadors from every country with which it has full diplomatic relations, but it is up to those nations who send them. The change was made by Saudi Arabia, the source added.

Leaders from Russia, Afghanistan, Myanmar, Syria and North Korea were not invited to join the 2,000 guests.

Moscow’s foreign ministry last week called the decision “deeply immoral” and “blasphemous” in memory of the queen. China will be present at the abbey, but was barred from the state site by parliamentary leaders.

(TBEN with TBEN and Reuters)