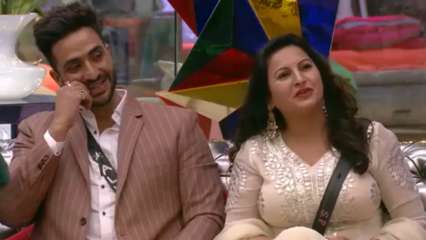 After Nikki Tamboli, another Bigg Boss 14 the candidate confessed her taste for Aly Goni. In Tuesday’s episode, Sonali Phogat revealed that she started falling in love with the actor and couldn’t stop blushing as she said it. Phogat’s gesture came shortly after Jasmin Bhasin’s expulsion from the show. Jasmine and Aly are rumored to be dating and she even said he was one for her. Speaking of Sonali, the inmates couldn’t help but tease her and Aly after her confession.

Sonali first told Arshi Khan, “Mujhe yeh sab nahi karna chahiye na (I shouldn’t be doing all this, right)? I didn’t feel like this earlier. But something happened. “Phogat also shared it with Eijaz Khan saying:”Mujhe pata hai ye cheesein mere liye nahi hai, but the feelings hate (I know it’s not for me, but there are feelings). “

Later, Sonali was overheard saying to Aly, Arshi and Rahul Vaidya, “When I entered the house, I found everyone the same, even Aly. But something happened last night.”

After Rakhi Sawant told Sonali that there is no future but supported her for confession, Phogat said: “Tabse lag raha hai meri duniya hi badal gayi (I feel like my world has changed since then). “

Soon after, Rahul sang ‘Teri Aankhon Ke Siwasong that got Aly and Sonali dancing with each other.

Meanwhile, Nikki had opened up about her feelings for Aly while sharing, “Mujhe woh really pasand hai (I really like). “

ALSO READ  Rakhi Sawant confesses to having a crush on Abhinav Shukla, asks permission from Bigg Boss to say 'I love you'

One of the Twitter users told Nikki about it, writing, “Have you observed Nikki’s feelings about Aly. Everyone wants Aly. But Aly only wants Jasmin.” To which Jasmin replied: “Hahaha #JasLy forever.”

Meanwhile, Jasmin Bhasin was kicked out of the Bigg Boss 14 house after staying for almost 100 days.

Kangana Ranaut refers to ‘gandagi’ in Bollywood, criticizing him for ‘provoking terrorism and violence’

Boeing 737 MAX to fly in Europe again after 22 months