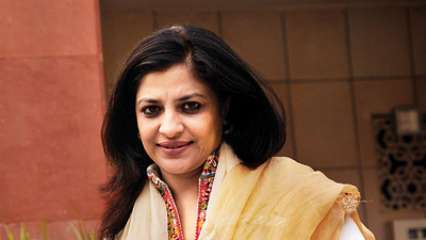 BJP Delhi Vice-President Shazia Ilmi on Saturday (February 20) filed a complaint against former Bahujan Samaj (BSP) party MP Akbar Ahmad “ Dumpy ” accusing the latter of behaving badly with her during the ‘a party on February 5.

The FIR against Akbar was filed at Vasant Kunj Police Station in Delhi under IPC sections 506 (threatening), 509 (word, gesture or act intended to insult a woman’s modesty).

In her complaint, the BJP leader claimed that she was present at Chetan Seth’s party in Vasant Kunj where Akbar mistreated her. Shazia said ambassadors from several countries, including Chile, Paraguay, Ecuador and Costa Rica, were also present in the party.

Shazia said in her complaint that she was speaking to the Chilean Ambassador when Akbar Ahmed Dumpy joined the conversation and started abusing Prime Minister Narendra Modi and the BJP. She added that people tried to stop Akbar but he continued to launch abuses.

The BJP chief had previously gone to the CR Park police station to register his complaint, but since the party took place in Vasant Kunj, that is why the FIR was filed there. A case under Article 506, 509 of the IPC on the complaint was filed on February 7 at the Vasant Kunj South Police Station.

In Mukesh Ambani Security Scare, an abandoned car and now a threat letter

The Bharat Express News - February 26, 2021 0
There is a big update regarding the outcome of the first inter-level...