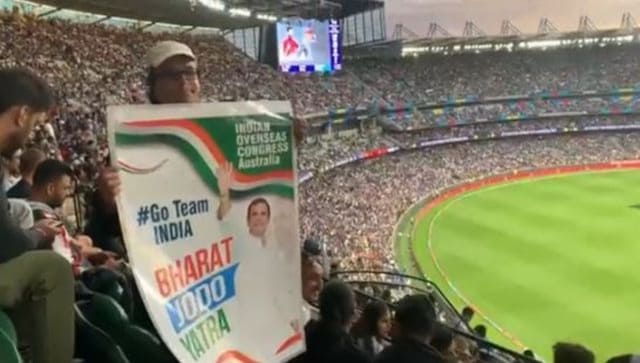 Screengrab of video shared by Dr. Shama Mohamed on Twitter

New Delhi: A complaint has been made to Melbourne stadium authorities after a poster of Congress leader Rahul Gandhi’s ‘Bharat Jodo Yatra’ was displayed on Sunday during a T20 World Cup match between India and Zimbabwe at the MCG.

“I am writing to you to make a formal complaint about banned political material being shown in the MCG on November 6 during the T20 World Cup India vs Zimbabwe match,” Shah wrote.

ALSO READ  'Historical Judgment' or 'Social Justice Setback'? How netas of all parties reacted to the EWS verdict

“This is a clear violation of the MCG Entry Conditions – Admission to Events – Condition 2.1 and also of the Cricket Australia Ticket & Entry Conditions Section 24a. The administration is expected to take strong action against such violation under the rules,” he added.

“The popularity of @RahulGandhi ji & #BharatJodoYatra knows no bounds,” she wrote.

WATCH: Hyderabad police tow away the car of Andra Pradesh CM’s sister with her in it