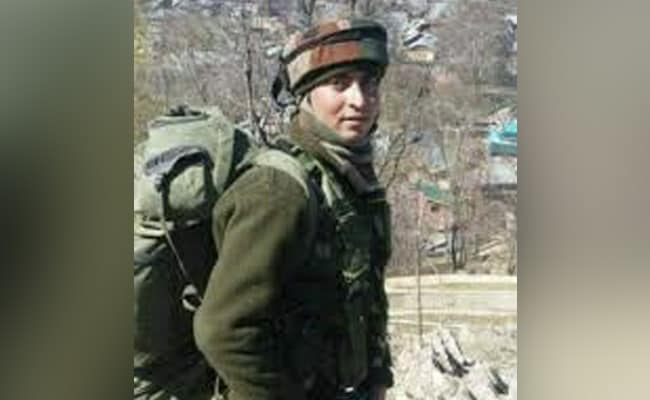 Rifleman Shakir Manzoor disappeared from Kulgam to J&K, where his burnt car was found (File)

A decomposed body found in a village in J & K’s Kulgam this morning has been claimed as that of rifleman Shakir Manzoor – an army soldier missing since August 2 last year, when he was kidnapped, tortured and killed by terrorists from the Shopian district.

Shakir Manzoor’s father, Manzoor Ahmed Wagay, told The Bharat Express News “I identified the body … it is my son. I identified it at his feet … his hair and also a bracelet that he wore. “

Police said, however, forensic procedures, including a TBEN test, were needed to confirm the body is Shakir Manzoor’s.

The body was found by residents who informed the police.

News of the body was also broadcast to Manzoor Ahmed Wagay, 56, for whom the year has been a painful quest to find his son.

It was Mr. Wagay who found his son’s blood-stained clothes a few days after his abduction.

For the past year, he left his home with shovels and shovels every day and returned empty-handed, and the family said the government had not helped locate Shakir Manzoor.

They did not even receive financial compensation.

According to official records, Mr Manzoor has been missing since last year – not dead. This means that his family was not entitled to his salary or any compensation.

ALSO READ  Coal crisis in India: 14 power plants closed in UP, Delhi on the brink of power failure

The family said they were questioned whether Mr Manzoor had joined a terrorist group.

Mr Wagay believes his son was tortured by his captors because they wanted him to make such a statement, which he refused.

Months later, police said the terrorist who claimed to have killed Shakir Manzoor died during an encounter and that they did not know where the soldier’s body was thrown.

Shakir Manzoor had returned home to celebrate Eid with his family.

He disappeared as he returned to his camp. The next day, police found his car on fire, and a few days later his bloodstained clothes were found in an apple orchard.

Subsequently, an audio clip surfaced with terrorists claiming responsibility. They spoke of denying his family their son’s body in retaliation for the government’s policy of not handing over the bodies of local activists to their families.

As of March 2020 last year, even the bodies of civilians killed during the actions of the security forces have not been returned to their families due to COVID-19 protocols.