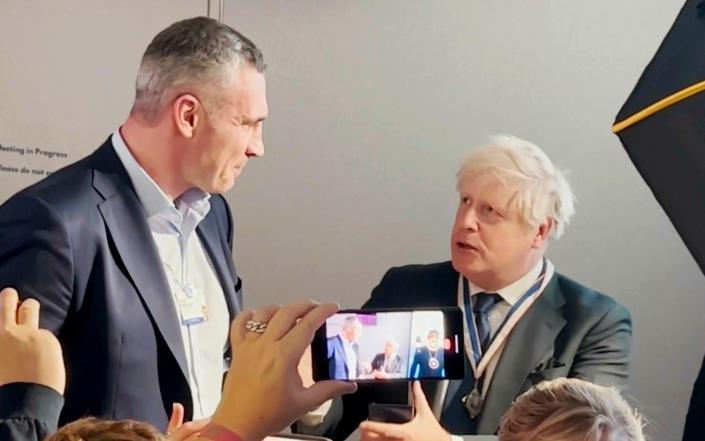 Boris Johnson has likened Vladimir Putin to “the fat kid in Dickens” who wants to “scare our flesh” with threats of the use of nuclear weapons.

The former prime minister said the Russian president “wants us to think about” the potential for unleashing nuclear weapons, but that “he will never do it”.

Speaking at a breakfast meeting on Ukraine at the World Economic Forum in Davos, Mr Johnson said: “Putin wants to present it as a nuclear standoff between NATO and Russia.

‘Nonsense. He’s not going to use nukes, okay. He’s like the fat boy in Dickens, he wants to corner us. He wants us to think about it. He’ll never do it.’

The comment is a reference to The Pickwick Papers, the first novel written by Charles Dickens, in which a boy tells an old lady that he intends to “make your flesh shudder” with a shocking revelation.

Johnson said the use of nuclear weapons would send the Russian president into “complete economic cryogenic paralysis” and “terrify the Russians”.

The former prime minister also told the public to “stop worrying about Kremlinology,” as he joked: “It’s hard to work out what’s going to happen in British politics, let alone the Kremlin. “

Gove: Government wants to cut regulation to ‘unlock the animal spirits of the economy’

In The Telegraph, Sir James Dyson, the billionaire entrepreneur and founder of the Dyson technology empire, warned that the government of Rishi Sunak’s government’s “short-sighted” and “dumb” economic approach has left Britain in a state of “Covid inertia”. (you can read the full story here).

Michael Gove was asked about the comments this morning and Leveling Up’s secretary, unsurprisingly, said he disagreed with the businessman’s assessment. He did say, however, that the government is trying to reduce regulation to “unlock the animal spirits of the economy”.

Speaking to LBC Radio, Mr Gove said: “I respectfully disagree. We are spending £20bn on research and development across the country. We are absolutely committed to economic growth and earlier this week the Cabinet reviewed how we can improve regulation in various areas, some of which are very close to Sir James’s heart.

“He’s a man who wants the whole country to do even better and that kind of ambition is admirable, but I would say to Sir James and others that this government is absolutely committed to increasing economic growth, it’s one of the top priorities that Rishi outlined at the start of the year.”

He added: “We are also looking at regulation now that we are outside the European Union to help unlock the animal spirits of the economy in a way I hope Sir James would approve.”

Michael Gove has dismissed reports that Tory MPs in fringe seats have been told not to use the phrase “level up” because people don’t know what it means. Reports had suggested MPs were told to swap it for “improving communities” or “measuring”.

When asked if the phrase was banned, Leveling Up’s secretary told LBC Radio: “No, leveling up is absolutely the central domestic mission of this government.

“We want to ensure more economic growth across the country, especially in lower productivity areas and that is why we are not just investing cash because that alone is not enough, it is also why we support local people and ensure that we are working with the private sector to provide people with quality jobs in areas that have historically been overlooked and undervalued.”

Rishi Sunak’s home constituency in Richmond in Yorkshire will receive £19 million as part of the latest wave of funding, with the money going to Catterick Garrison to revitalize the town centre.

Asked if the money was awarded because it is Mr Sunak’s constituency, Michael Gove, Leveling Up’s secretary, told LBC Radio: “No, it has nothing to do with that.

“It’s all about the money going to Catterick, which I think is the largest infantry base in the country and the money will help ensure proper investment in the neighborhood where service families live.”

Michael Gove has rejected claims that the government’s latest leveling funding (see message below at 07.54) favors the South East of England over less affluent areas in the Red Wall.

Leveling Up’s secretary told LBC Radio, “Well, that’s just not true. The amount of money we spend per capita is much higher in the Northwest and Northeast.”

Boris Johnson: ‘Tell Putin to get the puck out of Ukraine’

Boris Johnson said Russia needs to “get the puck out of Ukraine” after a fellow panelist used an ice hockey analogy at an event at the World Economic Forum in Davos this morning.

Mr Johnson then joked “tell Putin to get the puck out of Ukraine”, prompting laughter from the audience.

Leveling up cash will help “overlooked and undervalued” areas

Rishi Sunak today announces £2bn in funding for more than 100 projects across the UK, once again reiterating its commitment to the government’s leveling agenda.

Analysis of the funding announcements by The Telegraph revealed that Mr Sunak has sent more money to the South East and South West than his predecessor Boris Johnson (you can read the full story here).

Mr Sunak and Michael Gove, Leveling Up’s secretary, are visiting Blackpool today to launch the funding and the latter said this morning it is about helping parts of the country that have been “overlooked and undervalued” in the past.

Speaking to Sky News, he said: “The reason I’m here is that we want to take the whole country to the next level. We want to make sure that in areas like Blackpool that have been overlooked and undervalued in the past, there is invested in the future.”

Michael Gove, Leveling Up’s secretary, said the government could not agree to every wage increase demanded in the public sector as it would lead to public finances “getting out of control”.

Speaking on the second day of a nurses’ strike over pay and conditions, Mr Gove told Sky News: “What we cannot do is necessarily accede to every public sector demand for wage increases because we are not in a position where public finances generally get out of hand.”

Simon Clarke, the former cabinet minister, was criticized by the Royal College of Nursing yesterday after telling nurses that “there is something wrong with your budgeting” if they depend on handouts from food banks.

Michael Gove, Leveling Up’s secretary, was asked this morning if he agreed with the sentiment and he told Sky News: “No, I would never put it that way.

“I think we appreciate that nurses, everyone who works on the front lines of the National Health Service, are not just doing a great job and my thanks and gratitude to nurses today is something I want to express very deeply and personally.”

Boris Johnson said Vladimir Putin will not use nuclear weapons because it would send the Russian president into “complete economic cryogenic paralysis” and “terrify the Russians”.

He told the event at the World Economic Forum in Davos: “He’s not going to do it. Don’t go down that rabbit hole, stop it.”

Mr Johnson also told the audience about the situation in Ukraine at the event to stop worrying about the Kremlin, as he joked: “It’s hard to work out what’s going to happen in British politics, let stand in the Kremlin.”

Boris Johnson has likened Vladimir Putin to “the fat kid in Dickens” who wants to “corner us” with threats of the use of nuclear weapons.

Speaking at a breakfast meeting on Ukraine at the World Economic Forum in Davos this morning, the former prime minister said: “Putin wants to present it as a nuclear standoff between NATO and Russia.

‘Nonsense. He’s not going to use nukes, okay. He’s like the fat boy in Dickens, he wants to corner us. He wants us to think about it. He’ll never do it.’

Good morning and welcome to today’s live blog about politics.

Boris Johnson has spoken at an event on Ukraine at the World Economic Forum in Davos and Rishi Sunak will later comment on his new level up.

We also have Michael Gove, the Secretary of Leveling Up, in the broadcast round.

It promises to be a busy day in British politics and I will do my best to guide you through the most important developments.

Climate change is contributing to the spread of antibiotic-resistant ‘superbugs’: UN report