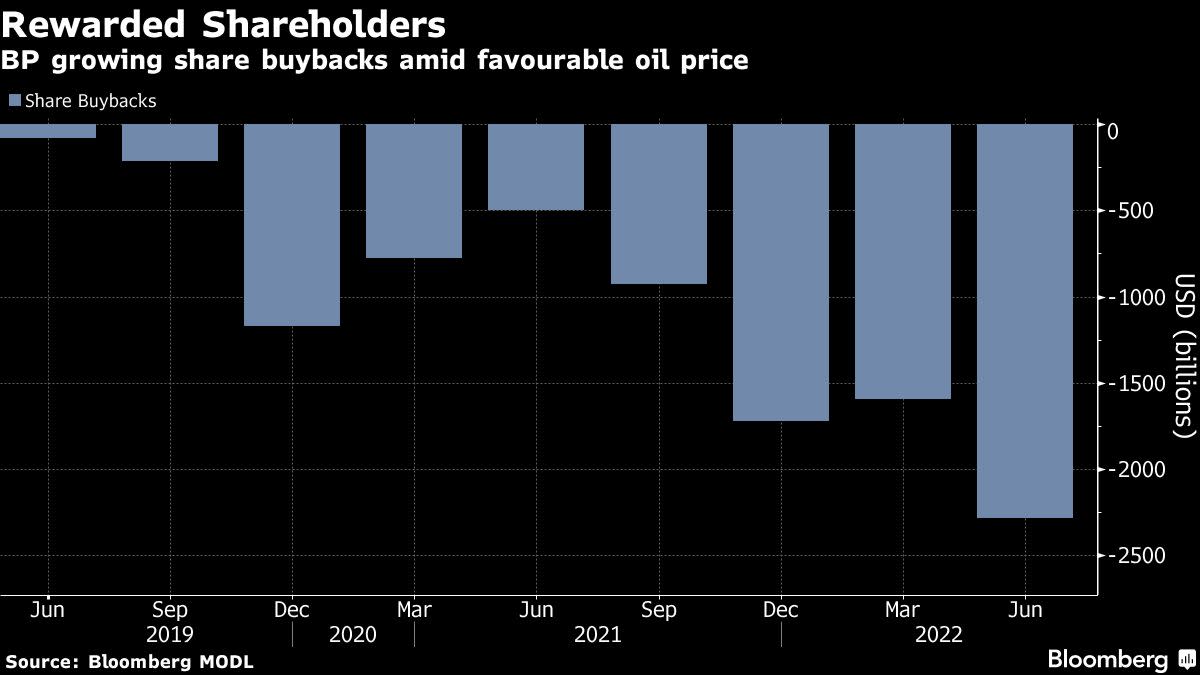 (Bloomberg) — BP Plc increased its dividend and accelerated share buybacks at the fastest pace to date after profits rose sharply.

The oil and gas industry is boosting returns for shareholders as money pours in, even as the energy crisis from Russia’s invasion of Ukraine threatens the global economy. BP said it expects prices to remain high and emphasized its investment in additional inventories.

“Today’s results show that BP continues to perform through its transformation,” CEO Bernard Looney said in a statement on Tuesday. The company “delivers the oil and gas the world needs today – while investing to accelerate the energy transition.”

Following in the footsteps of most of its peers, the London-based company said it will repurchase $3.5 billion in shares over the next three months, on top of the $3.8 billion it had already bought back in the first half. It also increased its dividend by 10%.

BP’s adjusted net income for the second quarter was $8.45 billion, the highest since 2008 and well ahead of even analysts’ highest estimates. This wasn’t just due to high crude oil and natural gas prices — the company’s refineries were running strong margins and oil traders delivered “exceptional” performances.

The dividend was increased to 6 cents per share, an improvement from a previous commitment to increase the payout by about 4% per year through 2025. Net debt fell to $22.82 billion at the end of the period, down from $32.7 billion a year ago.

The oil sector’s skyrocketing profits come at a politically difficult time for an industry accused of benefiting from the fallout from Russian President Vladimir Putin’s aggression, while also not investing enough in new drilling. In addition to its profit statement, BP published a comprehensive list of investments it is making in the UK, where rising energy costs have become a hot political topic and the North Sea oil and gas industry has already been hit by a windfall tax.

With fears of a recession mounting, there is speculation that the second quarter could be the high for Big Oil this year. BP said it expects oil and natural gas prices and refining margins to remain elevated in the third quarter due to disruptions in Russia’s supply, relatively low inventories and reduced spare capacity.