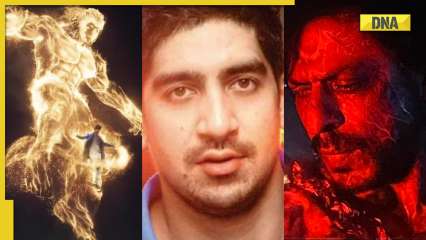 Brahmastra Part One: Shiva director Ayan Mukerji is “forever grateful to Mr Shah Rukh Khan” who, in addition to his extensive cameo, brought his expertise from working on many VFX-heavy films to the filmmaker’s most ambitious project. And Ayan shows this gratitude in the credits of the film. “There is no way to ever repay what Shah Rukh Khan has done on ‘Brahmastra’. Unanimously, one of the favorite things in ‘Brahmastra’ has been the order of Shah Rukh sir,” Mukerji told PTI in an interview.

And one couldn’t agree more with Ayan. The loudest cheers and most appreciation for Brahmastra was certainly for Shah Rukh Khan’s extended cameo in the film in which he plays the central role of Vanarastra, one of Brahmastra’s protectors.

When asked how Shah Rukh Khan got on board and the superstar’s response to so much appreciation for his cameo in the film, Ayan recently told India Today in an interview, “We contacted him. I spoke to him and called him just a day before the movie was released his spirit and blessing are there in Brahmastra we need to take a moment to say what mr shah rukh khan agreed to do for brahmastra is something magical thats why we appreciate It’s like saying ‘forever grateful’ because there was no other way to put it. I’m so happy that people love his series. I feel it unanimously. Everyone enjoys that series.”

READ: Brahmastra: After Ranbir Kapoor, Ayan Mukerji Opens Up Film’s Budget, Says ‘It Was An Investment…’

Ayan added that he couldn’t believe that SRK had agreed to play a part in his film and open and continue the film with his personality. “I’m glad we managed to make that series so good because when he agreed to be a part of this movie to open up and take the movie with his personality, it was like I couldn’t believe it.” that he agreed. We needed it so much for the opening of the film. And he agreed so generously. Honestly, we went up to him and we thought maybe he’d say it was a great moment and I wouldn’t want to do it, but he was generous enough to say, “Yes, of course, I’d like to do it,” Ayan said.

During the conversation, Ranbir told India Today that actors who make guest appearances in films generally film for a day or two, but SRK shot for 10 days and devoted all of his time to the film. Expressing his gratitude, Ayan said that the Brahmastra team owes SRK a lot and that he hopes that one day they can all be so generous to someone else who needs that kind of help. “He gave us full time and he came in like he was really a part of the movie. We owe him a lot… We’re so excited that he’s a part of this movie,” Ayan concluded.

ALSO READ  Hansal Mehta takes a jibe at Kangana Ranaut's Dhaakad, responds to netizen who said 'you gave her a flop'

Brahmastra, released on September 9, follows the story of Shiva (Ranbir), a DJ, who embarks on a journey with his love interest Isha (Alia) to uncover the origin of his special powers and discover his connection to a secret society called Brahmansh. . , directed by Guruji (Amitabh Bachchan).

Khan plays Mohan Bhargava, a scientist and an important member of Brahmansh, who guards one of the pieces of ancient Astra. His character wields the ‘Vanarastra’ in the film.