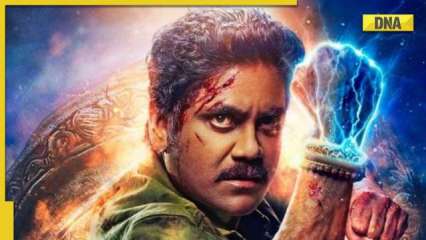 When it comes to Hindi movies, veteran actor Nagarjuna says that he is always looking for an experience that satisfies his soul and that is why he embarked on “Brahmastra Part One: Shiva” after many years of absence from Bollywood.

The actor returns to Hindi cinema after nearly two decades with a cameo appearance in the Ayan Mukerji-directed fantasy adventure epic, directed by Ranbir Kapoor and Alia Bhatt. “I got incredible roles. (But) I’m kind of a home bird. I love living in Hyderabad. I’ve always played very special roles in Bollywood. Whatever I’ve done from the start, it was important for me to entertain All roles whom I came to seek for me, I never have (went for them).

“Here, working in Bollywood, I look forward to experience and soul satisfaction as they call it and I do roles that are not on my shoulders. It’s always been that way,” the 63-year-old star, who has appeared in Bollywood films such as Shiva , Khuda Gawah, Criminal and Zakhm, told PTI in an interview.

His last release was JP Dutta’s war drama LOC: Kargil (2003). In Brahmastra, which has collected more than Rs 300 crore in gross box office collections worldwide since its release on September 9, Nagarjuna performs as an artist named Anish Shetty, who possesses the power of the ‘Nandi Astra’.

The film is the first in an ambitiously planned trilogy that will mark the beginning of a new cinematic universe, titled “The Astraverse”. Nagarjuna said he chose to make this film because he saw it as a “rare opportunity” that came at a time when there is a growing exchange of talent between different film industries in India. “A movie like Brahamastra is the right opportunity. The bridges have opened and so everyone is going everywhere. And India has become one industry and so it should be, because Indian people love movies and cricket. I’m so happy that this one film helped the industry grow and actors get different roles in different languages?, he added.

Nagarjuna recalled that Mukerji offered him Brahmastra in 2018, but he had one condition before saying yes to it. “When I was told that Ayan wants me to play a part in his movie, I said sure, but what am I going to do in such a movie? And I won’t do it if it doesn’t work for me. It’s not about the length , it must work for me in my heart.

ALSO READ  Malaika Arora talks about her relationship with ex-husband Arbaaz Khan, says: 'I made my choice...'

“Ayan came to Hyderabad and explained the whole thing and he had been given a book, like a little comic book, every frame was ready. Every page of the book was there, nothing less, nothing more,” he said.
What interested Nagarjuna most about Brahamstra was that it took him back to his days of watching mythological shows on television. He remembered growing up watching Ramayana and Mahabharata and many folklore movies.

“I had seen in ‘Maharabharata’ where they had used these astras in the war and that interested me. I also read a lot of Chitra Katha comics when I was young. India makes this. It brought me back to all those memories. And it didn’t take long for me to say yes.?

During the filming for the film, packed with visual effects, Nagarjuna said it turned out to be a unique experience as he had to keep his imagination open when his character showed his superpowers. “For a series, Ayan said that some kind of charge will form around me, the eyes will turn blue. And as I run I must build up my speed because there will be a bull rising from the ground behind me. He has explained all this,’ he said.

Asked about the many fan theories surrounding his character, including a plea for a spin-off film, Nagarjuna said the project has not yet been discussed. “I’m glad people liked the character, it came at the right time in the movie and that’s why it was so impressive,” he added.

Nagarjuna said he has been waiting for an opportunity to collaborate with Rajamouli, known for blockbusters such as “Magadheera”, “Eega”, “Baahubali” movies and “RRR”. “I keep asking and taunting Rajamouli about making a movie with me and he would always laugh. When the time comes, it will happen. When Rajamouli writes, then he goes for his actors. But he has to come up with the script first, the said actor.