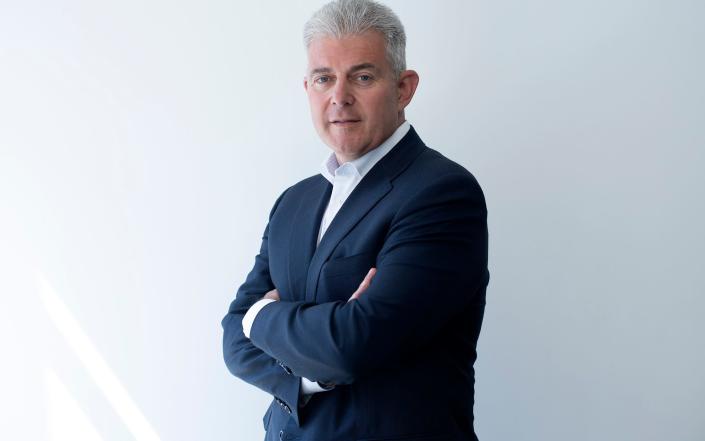 A former minister has broken cover to accuse Rishi Sunak of blocking attempts to break the Brexit deadlock with the EU.

Brandon Lewis, the ex-secretary of Northern Ireland, claimed that the Treasury under Mr Sunak had “enormous resistance” to attempts to ignore the Northern Ireland Protocol and was more focused on trying to “keep the EU happy”.

Mr Lewis made the comments when he backed Liz Truss for the Conservative leadership, claiming she was “much more likely” than Mr Sunak to achieve a swift return to power-sharing in Northern Ireland if she becomes Prime Minister.

Mr Lewis was Secretary of Northern Ireland from February 2020 until earlier this month when he turned down cabinet promotions to join the exodus of ministers resigning from Boris Johnson’s government.

In that role, he helped develop the Northern Ireland Protocol Act, which aims to remove controversial trade barriers between Britain and Northern Ireland by scrapping elements of the Brexit deal with the EU.

In an exclusive interview with The Telegraph, he claimed that while Mr Sunak expressed his support for the bill at a rally in Leeds on Thursday, it was inconsistent with the ex-chancellor’s record in government.

“It’s good to see him come around to see that that’s the way forward because that doesn’t quite reflect the experience I’ve had with the Treasury over the past year and a half,” he said.

Lewis claimed work on the legislation in 2021 had met “enormous resistance from the Treasury”, with the department focusing more on the likely EU response than on the difficulties of Northern Irish citizens or concerns about the territorial integrity of Ireland. the UK.

“The Treasury seems in my experience to want to try to keep the EU happy, when I have always felt that our focus should be on delivering results for the people of the UK and doing what is right through them as their sovereign government, ” he said.

“The concern has always been, for the Treasury, ‘what will the EU’s response be’, rather than ‘how do we get this to work, and how do we solve this problem that is a problem for the UK?’”

Mr Sunak’s team insisted this week that the former chancellor was a “believer in Brexit” from the start and would go ahead with the bill “until and unless the EU says it is willing to come to the table” to reintroduce negotiate the protocol.

However, Lewis said the protocol meant ministers “couldn’t even get a Northern Ireland free port off the ground” despite Mr Sunak’s long-standing champion of duty-free zones.

Although he initially supported Nadhim Zahawi in the leadership race, Mr Lewis said it had been an “easy choice” to back Liz Truss, in part because of his experience working with Northern Ireland’s Foreign Secretary.

“What I’ve seen consistently with Liz is someone who understands the union, has been strong and determined in defending and protecting the union,” he said.

ALSO READ  TBEN PHOTOS: The Story of India, 75 Years in the Making

While working on the bill, he said there were times when he and the secretary of state “fought against” the government’s “machine” but “Liz was determined to push through”.

The foreign minister’s pleading for the bill meant that if she became prime minister, the EU would “know where they stand,” he claimed.

“I think that’s important because we’ve consistently seen throughout the Brexit process that the EU has only really shown flexibility in moving when they’re forced to.”

Mr Lewis downplayed the risks of a tough stance that would spark a trade war, saying the UK and the EU had bigger economic challenges to face.

“While we’re dealing with things like Ukraine, the EU’s concerns about a Norfolk sausage being sold in Belfast don’t really seem like something they should be too concerned about.

“Norfolk sausages are healthy, they’re good! Both Liz and I, as MPs from Norfolk, can confirm that.”

Despite the row over the protocol, he said Ms Truss had been able to work productively with the EU in areas of “mutual interest”, including Ukraine.

And Mr Lewis said Mr Truss would be in a better position to bring the Democratic Unionist Party back to power if she became Prime Minister.

“[The DUP] know Liz, they trust Liz, because she brought up the bill… I think that will give them a lot more confidence,” he said.

“Ultimately, I think that as Prime Minister, Liz will lead to a return to power-sharing in Stormont much faster.”

On Saturday evening, Ms Truss also had the support of Martin Howe, the Brexiteer QC.

In a blog for Lawyers for Britain, Mr Howe said he believed the Treasury “nearly succeeded” in scrapping the Protocol Act.

“I fear the reality of a Sunak premiership would be to trade the bill away in exchange for a quick deal with the EU to save face, leaving most of the protocol and issues in place” , he said.

During the interview, Mr. Lewis lashed out at the Treasury’s “orthodoxy,” including his alleged skepticism about the Laffer curve — the idea that cutting taxes can increase revenue.

“The Treasury has had an orthodoxy and a built-in kind of methodology about how it sees economic growth,” he said. “One of the areas where I think Liz has some really good ideas… is supply-side reform.”

Like Ms Truss, Mr Lewis supported Remain in the EU referendum before becoming a Brexit convert.

However, the pair took a contrasting approach to staying in cabinet when Johnson’s government fell.

While Ms Truss has emphasized her loyalty to the Prime Minister, Mr Lewis wrote a letter of resignation saying he had no choice but to leave as the government no longer upheld “honest, honesty and mutual respect” in the wake of Partygate and the sexual harassment allegations against Chris Pincher.

Explaining his choice, he told The Telegraph: “Everyone has to make their own decisions and everyone is in a different situation.

“The reason I resigned was because I flew back from Belfast on a Wednesday night, spent a few hours at number 10… and had a very long chat with the Prime Minister.”

After turning down promotional offers from Mr Johnson, “it just wasn’t sustainable for me…to then move on”.

“It’s the hardest decision I’ve made in politics.”