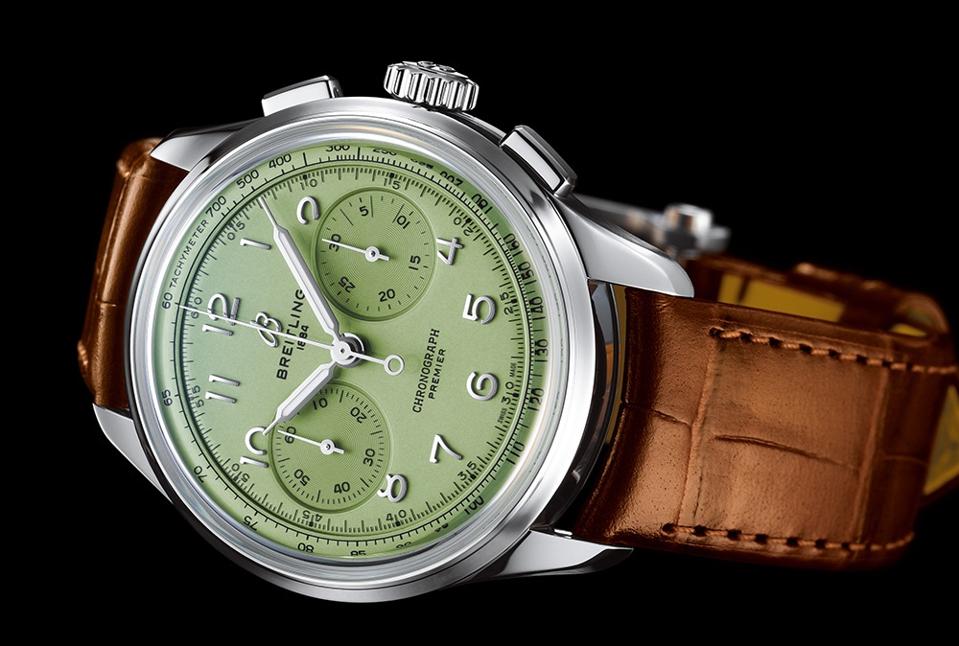 It’s watch week in Switzerland, where over 30 brands showcase their latest and greatest, and Breitling is one of the first to come out with a new collection. The Heritage Premier is a line of vintage-inspired chronographs, in flamboyant colors including lime green – a strong emerging trend – and salmon, a vintage favorite.

Breitling loves to market its collections with “squads” – there is the Spotlight women’s team, with Charlize Theron, a film team with Brad Pitt, and a triathlon team, a team of surfers and an aviation team. There is now a founding team, the members of which are no longer alive, except in the loving memory of the current CEO, Georges Kern. The team includes founder Léon Breitling, who ran the company from 1860 to 1914; his son, Gaston, who ran it until 1927, and his grandson, Willy, who joined the company in 1913 and ran it until 1979.

Today, Breitling pays homage to their achievements with the Heritage Premier collection of vintage styles with modern materials, movements and design elements. The models are a nod to certain specific achievements of the founders: in 1906, Léon patented a chronometer with a tachometer capable of measuring speeds between 15 and 150 km / h; in 1915, Gaston created one of the first wrist chronographs with an independent pusher at 2 o’clock; and in 1934, Willy patented the second independent chronograph pusher at 4 o’clock and created the original Premier collection in the 1940s.

The six watches in the new collection are divided into three categories – Chronograph, Duograph Datora – which reflect the inventions of the founder’s team. Like its predecessor from the 1940s, the chronograph is hand-wound, but it is powered by a modern and state-of-the-art movement, the Breitling B09 caliber, based on the Breitling Manufacture 01 caliber. The pistachio green dial is a standout. concours, in a steel ($ 8,400) or 18-karat red gold ($ 20,200) case.

The Duograph has a rare split-seconds chronograph function that allows the wearer to simultaneously measure two elapsed times. It contains the mechanical hand-wound Breitling B15 caliber, based on the Breitling B03. It is available in steel with a blue dial ($ 10,250) or in 18k red gold with a black dial ($ 25,650).

The Datora is an annual calendar with day, date and moon phase display, powered by caliber B25. The vintage-inspired copper dial version comes with a steel case ($ 12,950), while the 18k gold version ($ 25,650) has a silver dial.

Breitling also introduced a new watch as part of its long-standing partnership with Bentley, the Premier B21 Chronograph Tourbillon 42 is a 25-piece limited edition in 18k red gold with a British racing green dial. It contains the Breitling B21 caliber, a COSC-certified tourbillon movement with a 55-hour power reserve. Its price is $ 52,000.

Indigenous language Wirdi is put online with an interactive dictionary