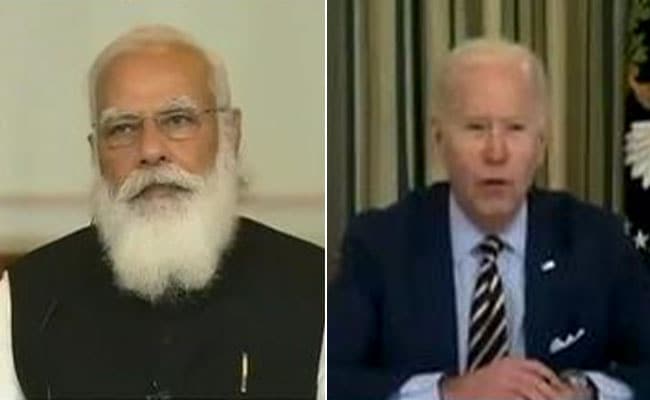 Intensifying their joint fight against terrorism, India and the United States said they would take concerted action against all terrorist groups, including those banned by the United Nations, condemned cross-border terrorism and called on perpetrators. attacks of 26/11 in Mumbai. be brought to justice.

A joint statement released after Prime Minister Narendra Modi’s first bilateral meeting with US President Joe Biden at the White House on Friday said the US and India stand united in a joint fight against global terrorism.

The two leaders reaffirmed that the United States and India “will take concerted action against all terrorist groups, including groups outlawed by the United Nations Security Council Resolution 1267 Sanctions Committee.”

They “condemn cross-border terrorism and demand that the perpetrators of the 11/26 attacks in Mumbai be brought to justice. They denounce any use of terrorist proxies and stress the importance of denying any logistical, financial or military support to terrorist groups that could be used to launch or plan terrorist attacks, ”the joint statement read.

Jamat-ud-Dawa (JuD) of the radical cleric based in Pakistan Hafiz Saeed is the front organization of Lashkar-e-Taiba which is responsible for the Bombay bombing in 2008 which killed 166 people, including six Americans.

Hafiz Saeed, a UN-designated terrorist on whom the United States has placed a bounty of $ 10 million, is currently being held at Kot Lakhpat high security prison in Lahore.

Lashkar-e-Taiba and Jaish-e-Mohammed as well as the Afghanistan-based Haqqani Network are banned terrorist entities under UNSCR 1267 regarding ISIL (Daesh), al-Qaeda and individuals, groups, businesses and associated entities.

Hafiz Saeed and the founder of JeM Masood Azhar are also listed as global terrorists under the 1267 sanctions regime.

India has repeatedly called on Pakistan to take credible, verifiable and irreversible action against terrorist networks and bring to justice the perpetrators of the 11/26 terrorist attacks in Mumbai.

Under Indian presidency last month, the UN Security Council adopted a strong resolution reiterating “the importance of combating terrorism in Afghanistan, including the individuals and entities designated in accordance with resolution 1267 (1999), and notes the relevant Taliban commitments ”.

At the time, Foreign Minister Harsh Vardhan Shringla said that the resolution “highlights terrorist individuals and entities designated by the United Nations Security Council (resolution) 1267. This is of direct importance to India. “.

Mr. Shringla had said that JeM and LeT are entities banned by the UN Security Council that must be called and condemned in the strongest possible terms.

“Needless to say, the adoption of the resolution is a strong signal from the Security Council and the international community on its expectations with regard to Afghanistan,” he said.

The resolution was presented by the United States, the United Kingdom and France. It was adopted after 13 council members voted in favor, while the permanent members Russia and China abstained on the vote.

The joint statement said Modi and Biden noted that the upcoming joint US-India Counterterrorism Task Force, the Nominations Dialogue and the Renewed US-Indian Homeland Security Dialogue will further strengthen counterterrorism cooperation between the two countries, including in the areas of intelligence sharing and law. enforcement cooperation.