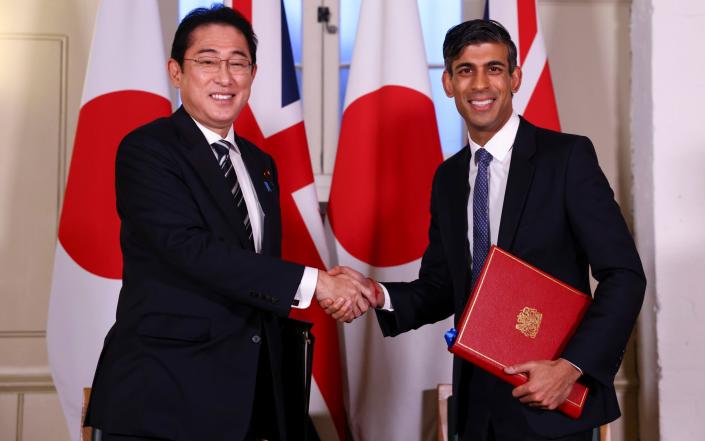 British and Japanese forces are planning joint military exercises in the Indo-Pacific to deter an increasingly aggressive China, Russia and North Korea.

On Wednesday, Rishi Sunak and Fumio Kishida, Japan’s prime minister, signed a defense deal in London that will form the basis for large-scale exercises to face Xi Jinping, Vladimir Putin and Kim Jong-un.

The agreement was a “milestone” that would make joint military exercises with the British Army and Royal Navy “smoother”, she said.

The new agreement allows Japanese troops to be stationed in the UK, where they can help train Ukrainian soldiers alongside other countries, as well as British troops to be in Japan.

Any move to send soldiers to train Kiev’s armed forces would be a “show of dedication” from Tokyo, a British defense source told The Telegraph.

“Defence and security cooperation would benefit not only Japan and the UK, but broader global stability, leaders agreed,” a Downing Street spokesman said after Sunak met Mr Kishida at the Tower of London, where they viewed the armor donated to James. me through Japan.

Japan, which is constitutionally neutral, plans to increase its defense spending to 2 percent of GDP. But despite an invitation from Australia, it has held “no concrete talks” about joining the Aukus security pact.

Britain, the US and Australia signed the agreement in 2021, which will help Canberra build nuclear submarines.

“We may think about it later, but not now,” Ms. Ono said before Mr. Sunak held talks with Mr. Kishida.

The strengthening of defensive ties with Britain came after Japan named China as its “biggest strategic threat”, North Korea as its “biggest threat” and Russia as a source of “great concern”.

Tokyo has imposed sanctions on Moscow and has been sending military equipment to Kiev since the invasion. Mr Kishida has warned that “Ukraine today can be Asia tomorrow”.

He will also chair the next meeting of G7 leaders in Hiroshima in May, where he plans to once again put pressure on Putin over his nuclear threats in a city devastated by the atomic bomb during World War II.

“The security environment is very strict,” Ms. Ono said. “We have no choice but to consider whether our current status and current defense capacity can truly defend the life and legacy of the Japanese people.”