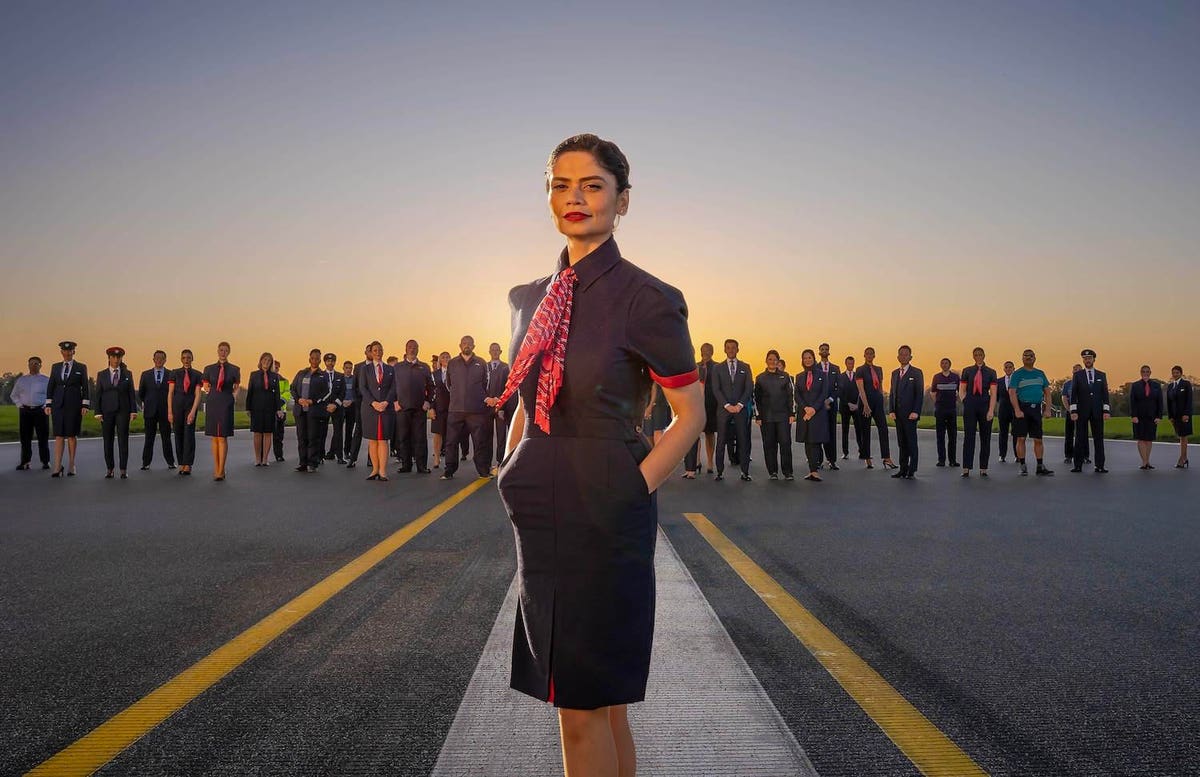 British Airways has unveiled a new uniform for the first time in nearly 20 years. Acclaimed Savile Row tailor and designer Ozwald Boateng and his team, led by Angelica Colucci, Head of Design and Production, created unique bespoke fabrics and designs for the airline, including a first for an airline: a jumpsuit. They took inspiration from the people of British Airways and the flying experience, spending time following staff through their role with the airline. The chic new collection artfully combines functionality with the elegance you would expect from Ozwald Boateng.

The collection includes a tailored three piece suit for men with regular and slim fit trousers and dress, skirt and trouser options for women, as well as a modern jumpsuit – an airline first. A tunic and hijab option has also been created for the global carrier. The air wave pattern found throughout the uniform collection, including jackets, T-shirts, buttons and ties, is inspired by the movement of air over an airplane wing. The jacquard fabric in all tailored garments features a variation of the airline’s iconic speed marque (the famous logo).

Boateng and his team have been developing the collection since 2018, looking at the different airport functions to understand how the uniform should perform for each task and to ensure a modern British stylish look with high quality, resilient fabrics that are easy to maintain.

More than 1,500 airline colleagues participated in 50 workshops to ensure garments were fit, from design workshops to prototype feedback and garment trials, to create an iconic collection that will stand the test of time. Many of the outdoor clothing have been tested in showers and freezers at -18 degrees Celsius to ensure they are water resistant, durable and suitable for extreme weather conditions.

British Airways, which launched the world’s first daily international scheduled air service (between London and Paris) in 1919, had military-inspired uniforms in its early days. Maurice Helman was the first fashion designer to design a uniform in 1946, a gray military-style utilitarian outfit with a tie and stylish hat. Since then, BA has collaborated with a number of famous fashion designers, including Hardy Amies (1960s and 1970s), Baccarat Weatherall (late 1970s), Roland Klein (1980s), Paul Costelloe (1990s) and Julien MacDonald, the designer of today’s airline uniform. , which will be replaced this spring by Ozwald Boateng’s.

Ozwald Boateng said of his collection: “Designing this uniform was a huge and painstaking undertaking and it went far beyond clothing. It was about creating an energetic shift internally. One of my main objectives was to create something that spoke to and for the airline colleagues. Something that inspired and empowered them, encouraged them to perform their role with pride and most importantly, to make sure they felt seen and heard. While the airline has a strong heritage, it was imperative to support creating a new story of change and transcendence while keeping it current.

Sustainability was at the heart of the latest uniform design process. More than 90% of the garments are made of sustainable material from recycled polyester blends. As part of British Airways’ BA Better World commitment to partnering with sustainable suppliers, the airline only works with manufacturers who are members of the “Better Cotton” initiative, the world’s leading cotton sustainability initiative, whose mission is to is to help cotton communities survive and thrive, while protecting and restoring the environment.

From spring 2023, the airline’s engineers and ground agents will be the first to wear the new uniform. All British Airways cabin crew, pilots and check-in staff will transition from their current uniform to the new one in summer 2023. When they pick up their new uniforms, they hand in their Julien MacDonald garments, which are either donated to charity or recycled to make toys, tablet holders, and more, with some items donated to the airline’s museum.