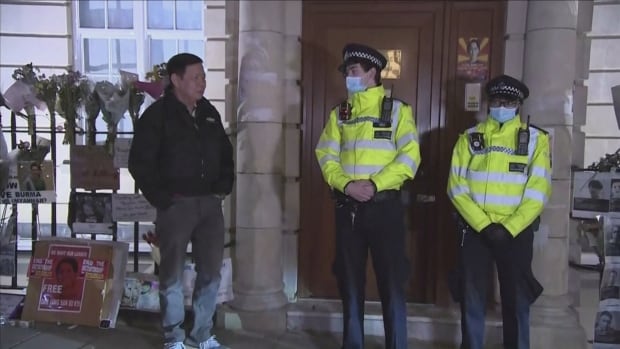 Myanmar’s ambassador to the UK told Reuters he was kicked out of the London embassy on Wednesday, sources claiming his deputy had kicked him out of the building and taken care of him on behalf of the military.

The military seized power in Myanmar in a coup in February and cracked down on pro-democracy protesters.

Ambassador Kyaw Zwar Minn has broken through the ranks of the ruling junta in recent weeks, calling for the release of detained civilian leader Aung San Suu Kyi.

“I have been locked out,” he told Reuters outside the embassy in central London.

“It’s kind of a coup, in the middle of London … you can see they are occupying my building,” he said, noting that he was speaking to the British Foreign Office about the situation.

WATCH | The ambassador is left standing in the street:

Myanmar’s ambassador to the UK Kyaw Zwar Minn was kicked out of the London embassy on Wednesday, apparently by his own deputy. 0:42

Four diplomatic sources with knowledge of the matter said Vice Ambassador Chit Win took over as charge d’affaires and he and the military attaché locked the ambassador outside the building.

Kyaw Zwar Minn spoke next to the embassy, ​​where police were on guard. He spoke to protesters on the street outside.

“We are aware of a protest outside the Myanmar Embassy in Mayfair, London. Law enforcement officers are present. There have (been) no arrests,” police said in a statement.

“This is my apartment building, I have to come in. That’s why I’m waiting here,” Kyaw Zwar Minn told Reuters.

Britain sanctioned members of Myanmar’s military and some of its business interests in the aftermath of the coup and demanded the restoration of democracy.

British officials have spoken to representatives from both sides and the police, with the aim of quickly and calmly resolving the standoff at the embassy.

“We are seeking further information following an incident at the Myanmar embassy in London,” a spokesperson for the British Foreign Office said in a statement.