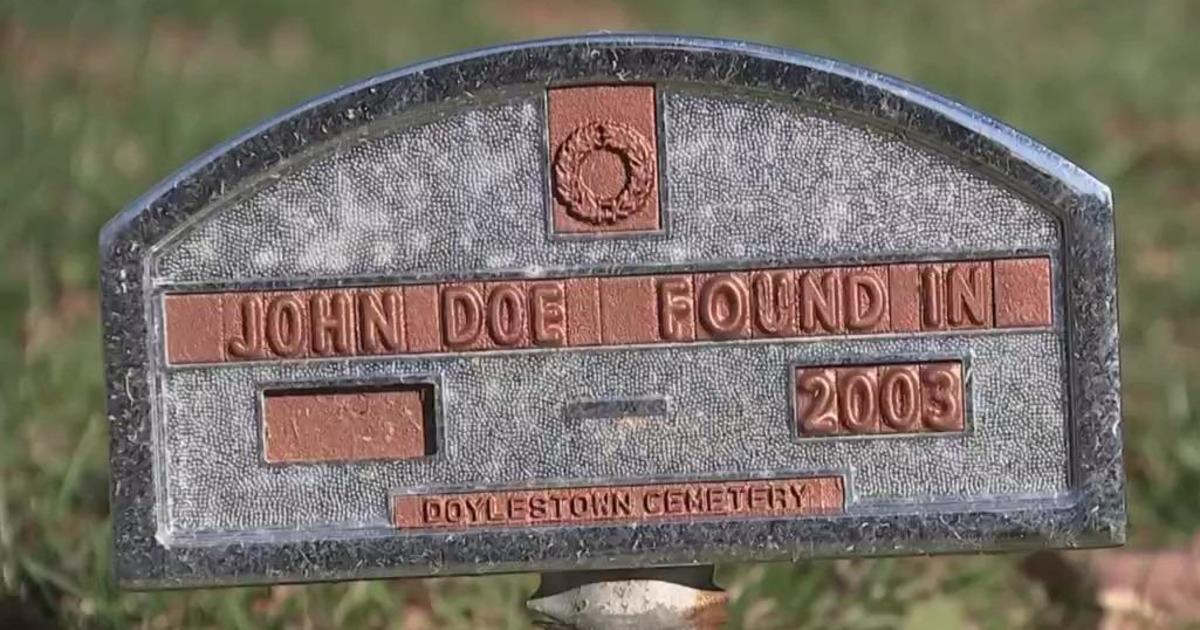 DOYLESTOWN, Pa. (TBEN) — On Thursday night’s CBS3 Mysteries – the attempt to solve a cold case of a victim known simply as John Doe.

For many years, authorities in Bucks County have been trying to identify a man whose remains were discovered near the Delaware River.

For nearly two decades, the name of the man buried in a plot at Doylestown Cemetery has been a mystery.

Who is John Doe? Where does he come from? What happened?

“The remains of John Doe have washed up on the banks of the Delaware River in Bensalem Township, and to date he has still not been identified,” said retired Detective Chris McMullin.

Joe Holden: “It came over the radio as what?”

Bensalem Township Police Detective John Monaghan: “A body found on the banks of the Delaware River.”

“I was actually at work the day it happened,” Monaghan said.

JH: “Do you remember that day?”

Monaghan: “I didn’t go to the scene, but I do remember that everyone was working on the case when I got back to headquarters.”

“The tombstone just says ‘John Doe’. He had a name, he deserves his name back,” McMullin said.

McMullin and McAndrew are behind a non-profit organization to revive long-dormant investigations – mysteries.

“We have a responsibility to these people who are often buried in graves,” McAndrew said. “This case is actually unique in that it has a grave marker that says at least John Doe. You know the Potters Field in Philadelphia doesn’t have that — they’re all unmarked graves.”

“We started a non-profit organization called ‘Cold Case Initiative’ and our mission for that is to raise money to conduct forensic testing for law enforcement police departments across the country that have cases like this, but it’s not in their budget to get it ready,” McMullin said.

On this sunny, crisp fall day in a Bucks County cemetery, the man in this grave is not forgotten.

Police say he was white, in his thirties with dark hair and a taller build.

“He was friends with someone, everyone has a friend at some point in their life,” Monaghan said. “Even if they’re boxed in. Someone’s going to find them somewhere. We just want someone to say, ‘Hey, that guy Bob lived down the street. No one saw him. He’s gone and that description matches.’ “

One of the big challenges to this case is that there isn’t even a picture of John Doe. What they do have is a picture of clothes.

John Doe’s body was recovered while wearing a 2X T-shirt – with a manufacturer’s label bearing the name “George”.

Investigators are confident that this case can be solved, that John Doe can get his name back. Genealogy will tie it together, researchers say.

“We just need to upload John Doe’s TBEN to one of the public databases like Gen Match and let our genealogist get to work and I’m pretty sure we’ll get an identification from them,” McMullin said.

“No one, whatever the story, deserves to leave, just drift off into nowhere, to a cemetery with a dull marker,” Monaghan said.

“Some of the most insignificant details turn out to be the most important details,” Monaghan added.

Who is John Doe?

If you have any information, call Detective John Monaghan of Bensalem Township at 215-633-3668.