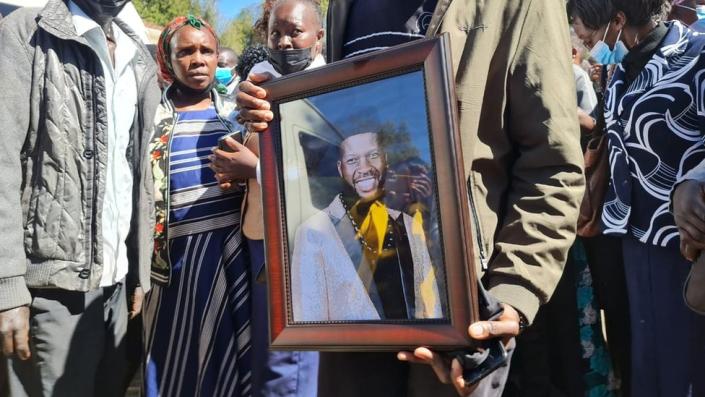 Kenyan LGBTQ activist Edwin Chiloba, who was choked in a murder that sparked outrage, is buried in his family’s village.

Hundreds brought him final honors on the land he was to inherit in the village of Sergoit in western Kenya.

Family spokeswoman Gaudencia Tanui told the TBEN the family was shocked by the vitriol aimed at Chiloba’s relatives about his sexuality.

It had deeply hurt the family, she said.

All hatred should not take away from the fact that a crime has been committed and justice must be served, Ms Tanui said.

At the funeral, mourner after mourner spoke of justice.

“No one should die by anyone’s hand, no matter what they’ve done, that’s not the kind of punishment anyone deserves,” said fellow student Sharon Otieno.

Chiloba’s body was found earlier this month in a metal coffin dumped by the roadside near the western Kenyan town of Eldoret, where he studied.

Police have arrested five suspects, including Chiloba’s partner, but no charges have been made yet.

The murder drew global condemnation, with human rights groups linking it to his sexuality.

But the police have not done so and have not yet given a motive for the murder.

Last week, the government’s chief pathologist, Johansen Oduor, said Chiloba had “died of suffocation, which is caused by suffocation.”

Socks had been stuffed into the victim’s mouth and a pair of jeans had been tied around his face, the pathologist said.

Social media tributes described the activist, who was in his mid-twenties, as “an amazing human being” and an “iconic fashion designer”.

He had moved to Eldoret from the capital Nairobi in 2019 to study fashion and was starting to make a name for himself in design, a friend said.

Last month, Chiloba wrote on Instagram that he was going to “fight for all the marginalized people,” saying he was marginalized himself.

Human rights organizations have called on the police to quickly solve his murder.

Although he was known as Edwin Chiloba, his registered name was Edwin Kiprotich Kiptoo.