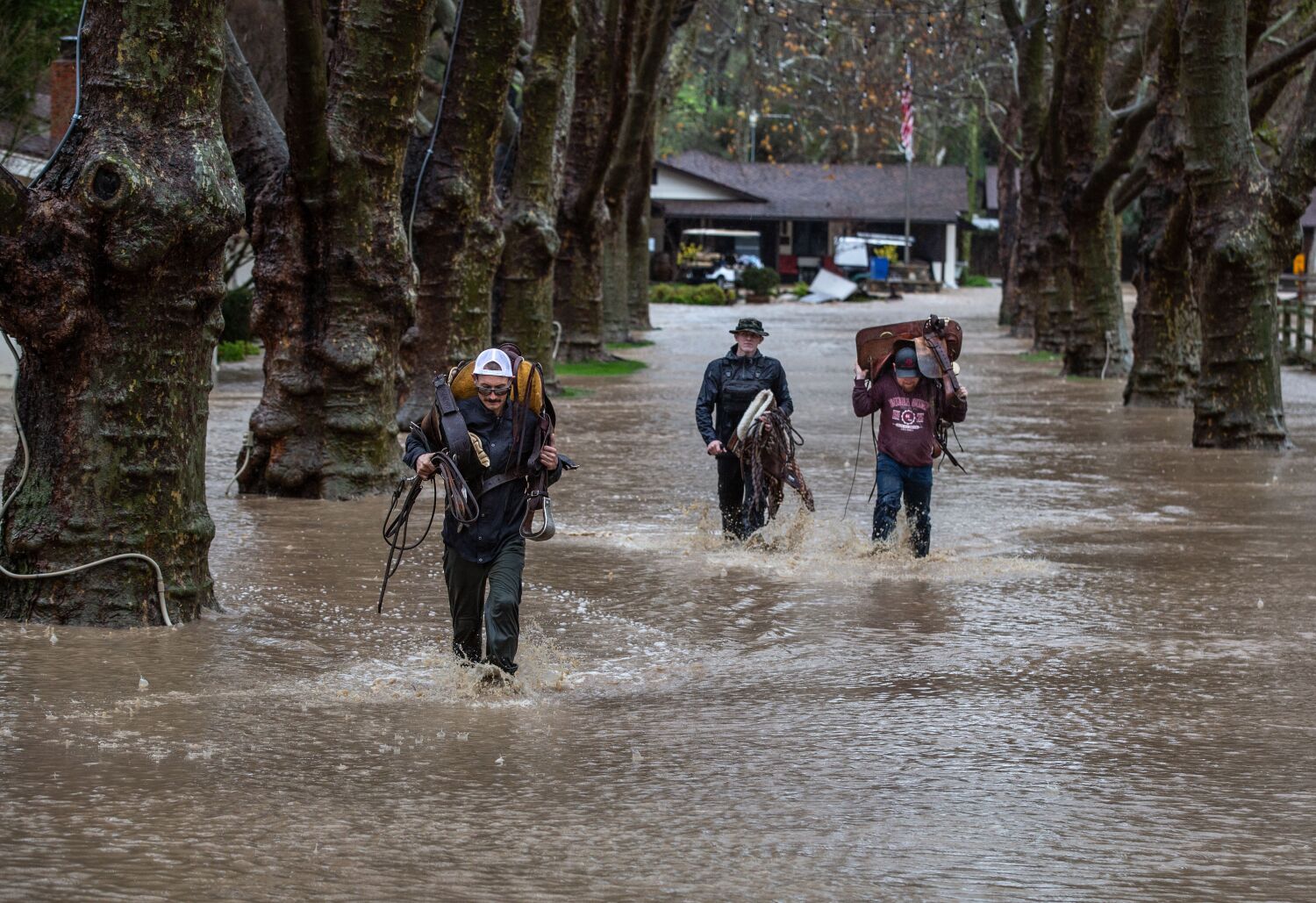 The latest in a series of intense winter storms will continue to batter Northern California Tuesday, bringing spells of thunder, heavy rain, wind and hail to the already waterlogged region as the death toll from the extreme weather rises.

As of early Tuesday, back-to-back storms across the state have killed at least 16 people.

Two motorists were killed Tuesday morning in an accident on Highway 99 in Tulare County caused by a tree falling into the roadway after being struck by lightning, said Steve Beal, spokesman for the California Highway Patrol.

“These floods are deadly and have now become more deadly than even the wildfires here in the state of California,” Newsom said at a news conference over the weekend.

Sheriff officials in Merced County went door-to-door to evacuate residents around Bear Creek after torrential rains caused the waterway to flood early Tuesday. The creek’s flood stage is 7 meters, but it had reached 8 meters, causing water to pour into the streets.

Approximately 189,000 Pacific Gas & Electric Co. customers will be without power on Tuesday. Attempts to restore power overnight were hampered by wind gusts of more than 70 mph in some areas and more than 100 lightning strikes, the utility said.

The Felton area of ​​Santa Cruz County, parts of which were flooded Monday by the surging San Lorenzo River, sustained extensive damage overnight from powerful gusts of up to 70 mph that toppled trees. Highway 17 was closed after power lines failed and sparks littered the roadway, according to the National Weather Service.

Forecasters are keeping a close eye on Monterey County’s Salinas and Big Sur rivers, which are in a flood phase but are expected to subside during the day.

ALSO READ  Governor Hochul, Democrats, if you mess with my gas stove, you'll get burned

While forecasters say the center of gravity of the storm, which began late Sunday, has moved through the northern half of the state, wet weather and periods of intense showers will occur throughout the region, with some thunderstorms.

“If a strong thunderstorm develops over an area, people should realize that it can really bring gusts of wind and produce heavy rainfall,” said Brooke Bingaman, a meteorologist with the National Weather Service in the San Francisco Bay Area. “So what that means is that while that thunderstorm is there, more trees can fall and the water can rise quickly if you’re near a creek or stream.”

In the Sacramento area, forecasters observed rotation on the radar indicating favorable conditions for tornado formation and issued a tornado warning even though no tornadoes emerged, said Cory Mueller, a meteorologist with the National Weather Service in Sacramento.

The high winds wreaked havoc in the area, toppling a semi truck and dangling on an overpass and toppling trees in El Dorado, Amador and Sacramento counties.

In nearly all of California, rainfall totals fell from 400% to 600% above average in recent weeks.

“This has resulted in nearly saturated soils and increasingly higher river levels,” the weather service said on Tuesday, adding that heavy rain during the day “will further exacerbate ongoing flooding while prolonging the risk of flash floods and mudslides, particularly in recent areas with burns.”

More rain is on the horizon with another atmospheric river — the sixth to hit the state since late December — expected to move into Northern California on Wednesday and precipitation to continue through the weekend.