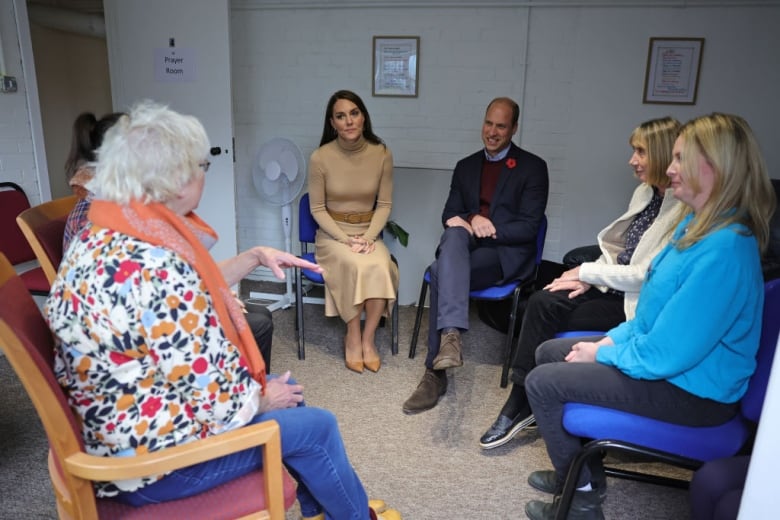 Hello, royal watchers. This is your regular dose of royal news and analysis. Reading this online? Sign up here to get this delivered to your inbox.

When the Prince and Princess of Wales were in a northern England resort town the other day, they were focusing their energies on an issue that has long been a priority for them: youth mental health.

The charities on the receiving end of the visit to Scarborough were warm and welcoming, and Prince William spoke of how “crucial” it is to provide mental health services within the community.

“For Catherine and I, the legacy of today is bringing together and collaborating and showing what can be done when a community comes together,” he said, according to The Telegraph.

“It is something we’d like to follow on and I hope can be represented more widely across the country.”

Headlines out of the visit suggested it represented a “new way of working,” and an attempt “to break from [the] traditional royal engagement model.”

During the visit, which was piloted as a “community impact day,” the royals met with people from organizations that will be supported through funding announced by their Royal Foundation. The money — 345,000 pounds — has already been raised, and reportedly came from both local contributions and their foundation.

But as much as there were efforts to frame this as a new way of doing royal business — and separate from the more typical visits that don’t come with such funding announcements and leadup work in the community — it was also well in keeping with royal tradition, and had at its core a more existential issue that has long hung over the monarchy.

“Royal visits, whether they are within the country [or] overseas, are now and have been for the last couple hundred years much more about making the monarchy visible in a way that therefore makes them relevant,” Judith Rowbotham, a social and cultural scholar and visiting research professor at the University of Plymouth in southwestern England, said in an interview.

“So what you are always seeing is a shift in the ways that incumbents if you like, a younger generation in the Royal Family, will always introduce a nuance, a twist to the presentation, but it’s simply presentation. It’s not a change to the substance.”

Since the death of Queen Elizabeth in September and the accession of King Charles, observers have been looking for signs of what this next reign may bring.

Visits and appearances by Charles have been under particular scrutiny. They made headlines again this week as he and Camilla, the Queen Consort, ran into a mixed reception in York, where eggs were thrown at Charles as they walked about in the northern English city where he unveiled the first statue of Queen Elizabeth since her death. Yet, even then, the new King and Queen Consort weren’t running into anything completely unknown for members of the Royal Family.

Eggs thrown at King Charles and Camilla in northern England

Four eggs were thrown at King Charles and Camilla, his wife and Queen Consort, while on tour in northern England. One narrowly missed the King, who carried on with his duties.

“On the one hand [they were] heckled, with … eggs thrown at them. On the other hand, they simply carried on, setting the tone for everybody else — just ignore it,” said Rowbotham.

“And it’s not the first [time] that Charles or various members of the Royal family historically as well as in the last reign and at the start of this reign have been subject to public expressions of disapproval, as well as approval.”

The royal visits since Charles came to the throne, said Rowbotham, “are very much about [showing] the monarchy is still here.”

“Yes, Elizabeth the Second is no longer with us, but the institution is…. It’s different, it’s changed and yet it’s still the same.”

In that vein, there is little to indicate that the more traditional royal visits will disappear, but there is also an apparent hope “community impact days” will offer a longer-term legacy than might come after those more run-of-the mill visits that see royals land in any given place for a few hours.

“Instead of visiting deprived communities, giving them a day in the sun and then hoping money will be raised as a result, the Prince and Princess of Wales want to reverse the process by using the buildup to a visit to generate money, which they can then announce and disburse when they get there,” Telegraph associate editor Gordon Rayner wrote.

“It is something of a gamble because it will, in effect, put a cash sum on the value of royal visits. It is a gamble [William] is more than happy to take.”

What’s been particularly interesting these days, said Rowbotham, and what the royal household will be watching, along with the royals themselves, is public reaction to them during visits, not just in the mainstream media, but on social media.

“We saw for instance the King and Queen holding the hands of a little boy who is blind and therefore couldn’t see them but he was excited to meet them when they took his hands,” said Rowbotham.

“It’s been picked up by the mainstream media but it was first circulated by photographs taken by members of the public.”

Equally, added Rowbotham, “the Princess of Wales visited a maternity health centre and she ended up giving a little boy her own poppy, and again that was picked up not primarily by the mainstream media but by photographers using their own phones.”

As well, Rowbotham has found it interesting that “so much of the comment since Charles came to the throne has been more sympathetic and approving of the monarchy and the Royal Family, with some notable individual exceptions, but as an institution and the leading working figures.”

It “might well turn out to be a honeymoon period,” she said. “Who knows.”

When King Charles took part in the Remembrance Day service at the Cenotaph in central London on Sunday, he placed a new wreath that paid tribute to the wreath of the two monarchs who preceded him: his mother Queen Elizabeth and his grandfather King George VI.

Charles started laying Elizabeth’s wreath on her behalf at the annual service in 2017, representing one of the most obvious and high-profile signals of the gradual transition that had been unfolding in the upper echelons of the House of Windsor for several years.

Now, as monarch, Charles placed a newly designed wreath of his own to honour those who lost their lives in military service. The wreath’s poppies are mounted on an arrangement of black leaves, the Royal Family said on its website, and the ribbon has his racing colours: scarlet, purple and gold.

Camilla, the Queen Consort, watched the service from a nearby balcony, and a wreath was laid for the first time on her behalf by an equerry from the royal household.

That wreath has her racing colours, which she inherited from her grandfather, and echoed the wreath of the last Queen Consort, Queen Elizabeth the Queen Mother, the Royal Family said.

Remembrance events for the Royal Family began with Camilla attending the opening of the Field of Remembrance at Westminster Abbey on Thursday.

The Queen Consort laid a cross in the Field of Remembrance during a short ceremony that drew more than 1,000 veterans to the Abbey grounds.

After weeks of anticipation, along with longstanding controversy over mixing royal fact and fiction, Season 5 of The Crown started streaming onto viewers’ screens this week and landed to decidedly mixed reviews.

Still, some themes seemed to emerge, including a sense that this season may lack some of the lustre of previous seasons of the award-winning Netflix drama that offers a fictionalized version of real-life events that unfolded in the House of Windsor during Queen Elizabeth’s reign.

“Season 5 is replete with terrific performances, especially from actors in recurring roles, but it’s no longer enough,” Nandini Balial wrote on RogerEbert.com. “Writer and creator Peter Morgan’s vision, like the monarchy circa 1990, is showing signs of strain.”

“I can forgive The Crown for jazzing up the facts — but not for being so horribly clunky,” ran the headline over an opinion column from The Guardian’s former royal correspondent, Stephen Bates.

The Telegraph gave Season 5 two stars out of five, and noted that “Peter Morgan’s Netflix drama began as a love letter to the late Queen. These days, he’s wielding his poison pen.”

On this side of the Atlantic, the New York Times found “Season 5 doesn’t have the life, the hard snap, of The Crown at its best.”

Others were more impressed. “The palace intrigue of The Crown will hold you spellbound,” Good Morning America headlined its review, and said the latest season is “more audacious and addictive than ever.”

More uniform was the assessment that several actors in the lead roles, the third contingent to take on high-profile parts including those of Queen Elizabeth, Prince Philip, then-Prince Charles and Diana, Princess of Wales, offer stellar performances.

One less-expected perspective comes from some viewers who are struggling to see one actor in her role because of another big-screen character she has played.

Imelda Staunton, the third actor to play Queen Elizabeth, has won praise for that portrayal, but some viewers have taken to social media lamenting that they are having trouble seeing past her previous appearance as Dolores Umbridge, a Defence Against the Dark Arts teacher of Harry Potter fame.

And then there are the numbers. In the U.K., more than one million people watched Season 5 on the first day of its release, the TBEN reported.

The first official TV ratings showed about 1.1 million people saw at least one episode on TV sets on Wednesday.

For the sake of comparison, the TBEN noted, 7.9 million people watched the latest rendition of I’m a Celebrity … Get me out of here!, a survival reality show that drops celebrities of varying degrees of fame into the Australian jungle.

In one of those odd coincidences, there’s even a bit of royal content in the jungle this year: Mike Tindall, husband of King Charles’s niece, Zara, is among the contestants.

Still, as a streaming show, viewership for Season 5 of The Crown is more likely to grow over time, the TBEN reported.

“Please know that addiction is not a choice. No one chooses to become an addict.”

– Kate, Princess of Wales, who is patron of The Forward Trust, an addiction recovery charity. In a video message, she urged those who have an addiction not to let shame hold them back from seeking help.

Sign up here to have The Royal Fascinator newsletter land in your inbox every other Friday.

I’m always happy to hear from you. Send your questions, ideas, comments, feedback and notes to [email protected] Problems with the newsletter? Please let me know about any typos, errors or glitches.