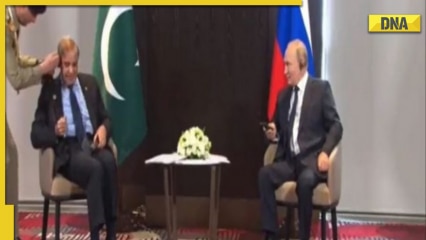 Shehbaz Sharif struggles with his earphones in one of the viral videos as Russian President Vladimir Putin looks on and smiles. “Can someone help me?” inquired Shehbaz Sharif, unable to operate the earphones. Later in the video, a person can be seen coming to the rescue twice and Putin also checking the earplug once.

President Putin waited for the device to be placed on Prime Minister Sharif’s ear.

Opposition leader PTI Shireen Mazari also shared the video, saying the ‘Crime Minister’ is a constant disgrace to Pakistan. “Even President Putin ended up just having to laugh at this clumsy man. Pathetic. This is what the conspirators wanted? To purposely have a politician who would not only be a swindler, but a pathetic apology for a prime minister?” she wrote.

This crime minister is a constant disgrace to Pakistan. Even President Putin eventually just had to laugh at this clumsy man. Miserable. Is this what conspirators wanted? To have a politician who would be not only a crook but a pathetic apology for a prime minister? pic.twitter.com/mmEhLY7RZg— Shireen Mazari (@ShireenMazari1) September 15, 2022

Shehbaz Sharif said Thursday in his meetings with world leaders from friendly countries, he explained the floods. “It was a long but productive day in Samarkand. During my meetings with leaders of our friendly countries, we agreed to strengthen trade and investment. I explained the floods caused by climate change. Food and energy shortages are a real challenge for our collective development agenda,” he tweeted.

It was a long but productive day in Samarkand. In my meetings with leaders of our friendly countries, we agreed on strengthening trade and investment. I explained the flooding caused by climate change. Food and energy shortages pose a real challenge to our shared development agenda. — Shehbaz Sharif (@CMShehbaz) September 15, 2022

This is the SCO’s first face-to-face meeting in two years after the COVID epidemic. The leaders of eight SCO member states, including Prime Minister Narendra Modi, attend the 22nd SCO conference.

READ| From food crisis to war between Russia and Ukraine: key issues discussed by Prime Minister Modi during his speech at the SCO summit

Baba Vanga Predictions: The Earth Could End in the Year 5079 and Other Shocking Predictions

Headmaster is concerned about group six students going to secondary

Headmaster is concerned about group six students going to secondary