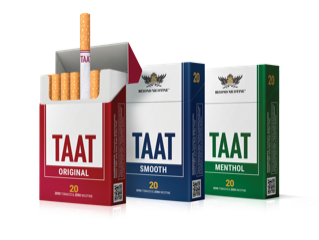 Vancouver-based TAAT Global Alternatives, a manufacturer of hemp-based cigarettes, has announced the closing of an additional $ 8 million private placement by a group of private investors led by Debbie Chang. Chang is the co-founder of Horizons Ventures, which serves as the venture capital arm of Hong Kong billionaire business mogul Li Ka-shing.

This placement follows an earlier investment of $ 5.4 million by Chang’s private group, which was completed in October 2020. This tranche included an award of warrants to purchase common shares subsequently exercised voluntarily by the group. de Chang for an additional $ 8 million in proceeds. As a result, the group has cumulatively invested more than $ 21.5 million in TAAT to date.

“It is a wonderful validation for such prolific investors to make a follow-on investment in TAAT as we continue our entry into the global $ 814 billion tobacco industry, with multiple international expansions already underway,” he said. said Setti Coscarella, CEO and Director of TAAT. .

“The initial investor investment in 2020 has enabled us to achieve many of the milestones we have achieved so far, including growing our manufacturing facilities, continuing research and development, placing TAAT in over 1,000 stores in the United States and establishing the organic brand TAAT as a well-known nicotine-free alternative to cigarettes for smokers aged 21 and over, ”added Coscarella. He said the proceeds from this investment would be used to explore expansion into Asian markets due to TAAT’s continued relationship with Chang.

TAAT Hemp Cigarettes have been designed to look, smell and taste like traditional tobacco cigarettes. The product is marketed specifically as a unique nicotine-free alternative to cigarettes. TAAT CEO and Director Setti Coscarella previously held a leadership role at Phillip Morris.

In an interview, Coscarella shared that TAAT is particularly pleased to have not only secured such a large investment, but which builds on a previous placement, further building an already successful business relationship between Horizons Ventures and TAAT.

“When companies now look to investment banking, especially at an early stage of capitalization, it can be difficult to find sticky long-term shareholders,” Coscarella explained.

Coscarella said Horizons Ventures favored TAAT because they “love the space and they love the opportunity for us to help solve a problem. They usually look at things that are more of a social good. And they like the fact that our product is a non-addictive option for smokers, ”Coscarella said. Unlike vapes, which always deliver nicotine, these hemp cigarettes help eliminate nicotine addiction by mimicking the experience in all other cosmetic ways.

“They believe, like me, that there is a huge market opportunity for a product like this. They want to participate early because that’s the nature of their business. In China alone, there are over 300 million smokers. That’s more smokers in a country than there are in the United States, ”Coscarella said.

This product differs from other smokable hemp products in several ways. Using hemp and other proprietary biomasses that Coscarella declined to categorize, citing privacy concerns, TAAT engineered a flavor profile “similar if not better than tobacco,” he said. Being a hemp product, the hemp flower also contains CBD, which has been shown in studies to satiate nicotine withdrawal.

“From the point of view of smokers, they will feel satisfied using our product, both in taste and form. And in terms of effects, ”Coscarella said.

Coscarella shared impressive financial data for TAAT’s current fiscal year, which ends October 31. In the first quarter, TAAT posted sales figures worth $ 165,000; The second quarter recorded sales of $ 685,000 and the third quarter generated $ 1.3 million. He expects this to continue to grow as the company adds new stores, states and countries.

Earlier this year, TAAT could only be found in Ohio.

“Right now we are in about 20 states, we are well in over 1000 stores and we are starting to participate in many trade shows,” Coscarella said, adding that TAAT also has international distribution and can be found in the UK, Ireland and Australia, with the rest of Europe not far behind.

Aside from the fact that he has a hot potato of a product on hand that has the ability to raise significant capital, Coscarella wanted to be very clear about TAAT’s “Beyond Tobacco” cigarettes, as TAAT calls them.

“Our product is not meant to get people to fit into the category,” Coscarella said. “There are almost a billion and a half smokers in the world. We want to tackle the existing smoker market. So if you don’t smoke then don’t start if you smoke you should probably quit. And if you don’t quit, you can try TAAT.

“He was a star”: Shreya Ghoshal shares poster for Sidharth Shukla-Shehnaaz...