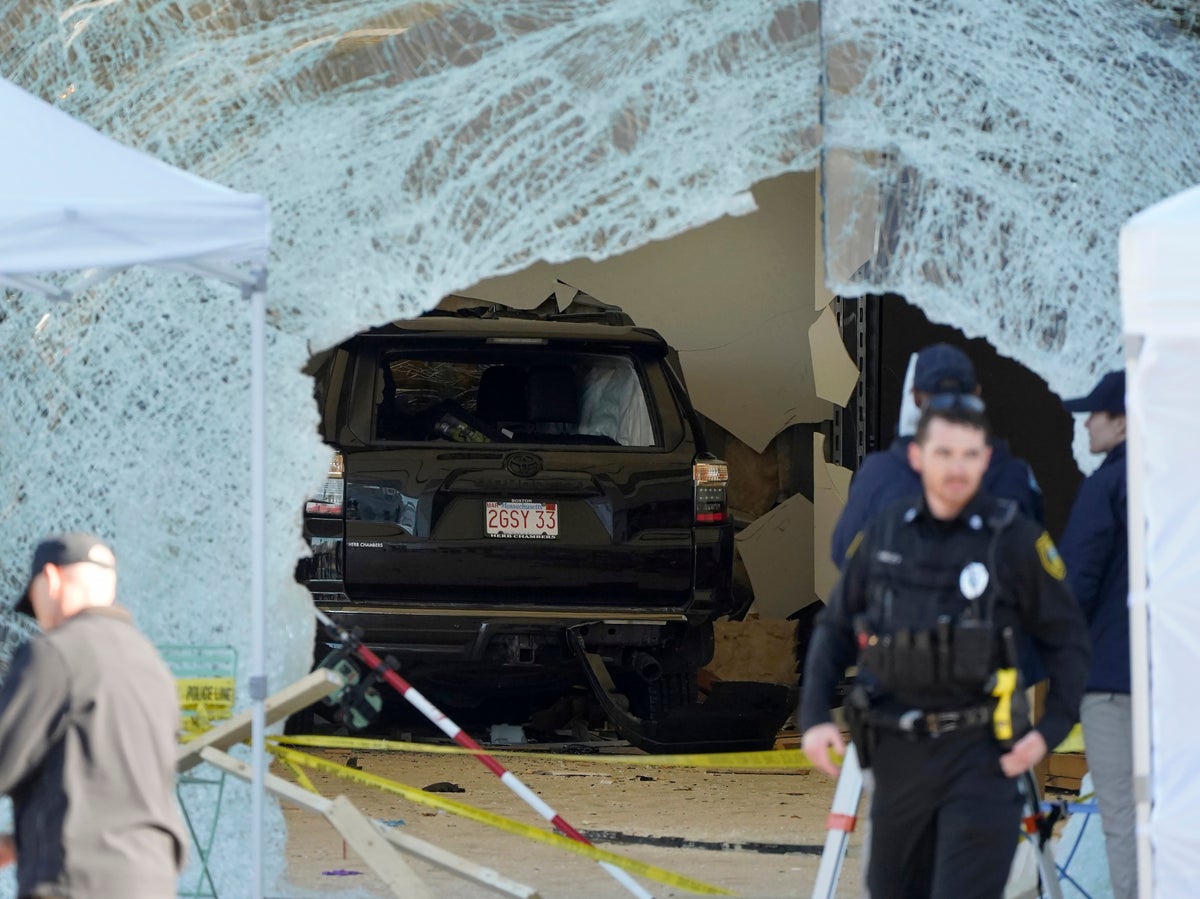 A car crashed into an Apple store in Hingham, a Boston suburb, killing one person and injuring at least 19.

The victims were taken to hospitals by ambulance after a black SUV drove into the store, Plymouth County District Attorney Tim Cruz said at a news conference Monday.

Mr Cruz said the driver was a man who was in the presence of police officers after the crash. He added that he cannot say at this time whether any prosecution action will be taken, but that an “active criminal investigation is underway”.

Hingham Fire Chief Steve Murphy said several people were pressed against the door at the back of the store. He added that the structural integrity of the building was being evaluated, but that was not an issue at the time of the press conference.

Mr Cruz said several 911 calls came in from Derby Street stores around 10:45 am.

“A dark-colored SUV … drove through a … glass window at an undetermined speed and hit several people,” Mr. Cruz told reporters.

The page for the Derby Street location on the Apple site reads, “We are sorry for the inconvenience caused while this store is closed. Please consider using our online services until we can reopen.”

Mr Cruz said the workers were “visibly shaken and they were gathering nearby”.

“This investigation is active and ongoing. We are very limited in what we can say at this point,” he added. “Fourteen of the victims were taken to South Shore Hospital and Weymouth and two victims [were] taken to hospitals in the Boston area.”

Those numbers later grew, with South Shore Health saying at a subsequent press briefing that they were treating 17 people from the crash for everything from head trauma to limb damage, WCVB reported.

South Shore Health’s chief of trauma, Dr. Christopher Burns, told the press that “we have multiple patients with life-threatening injuries.”

Two other victims were taken to Boston for treatment, officials said.

The Patriot Book identified the car as a Toyota 4Runner.

Police called for a tow truck to remove the vehicle that was stuck in the back wall of the store, trapping people. Several ambulances from units some distance from Hingham were brought to the scene, as was a medical helicopter.

The accident took place in a shopping center on Derbystraat. An MBTA bus was also used as triage.

There was a large hole in the glass wall of the store, according to footage from the scene. After the crash, several people lay on the ground just outside the store as they were attended to by first responders.

“My wife is on Derby Street in Hingham, a black 4Runner drove into the Apple Store at full speed,” said one man posted to Twitter shortly after the crash. “She said there are a lot of injuries – my wife used a spare jacket as a tourniquet.”

“It sounded like an explosion,” a witness said, according to WCVB. “It was so loud.”

A person at the scene told the local TV station that the driver appeared bloodied but alive when rescuers removed him from the SUV.

“You’d have to really speed up to get into the storage space at the back of the Apple Store,” Frank O’Brien, who was shopping in the area at the time of the incident, told WCVB.

Lynne Goyuk told the Boston 25 News that “it sounded like a bomb went off. We saw several people who should have sought medical attention, but they didn’t want to cross because they knew other people were critical.”

“I just heard shattering glass, and everyone ran to the window thinking it was a beating, and there was just a gaping hole in the middle of the Apple Store,” Emily McKenna told the local station. “I didn’t see the car go by, but someone said it was going pretty fast, so maybe it just lost control.”