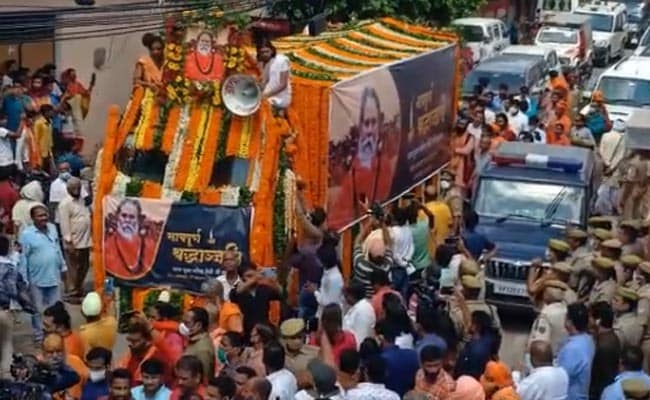 Narendra Giri was the head of Akhil Bharatiya Akhada Parishad.

A six-member team has been formed by the CBI to investigate the death of Narendra Giri, the religious leader who allegedly committed suicide on Monday in Uttar Pradesh. The team is on their way to Prayagraj – the biggest seer was found dead in his city ashram on Monday.

Narendra Giri was the head of the highest religious body Akhil Bharatiya Akhara Parishad. Chief Minister Yogi Adityanath had called for a CBI investigation into his death.

ALSO READ  Will Priyanka Gandhi be UP CM facing Congress? This is what Salman Khurshid said

The influential seer, pictured with many of the country’s top politicians, was found dead in his ashram, about 200 km from the state capital Lucknow, on Monday afternoon.

In a 13-page suicide note, he blamed Anand Giri – the ashram’s virtual number two – Aadya Tiwari and her son Sandeep Tiwari for his death. He said he was under pressure over what he called a “makeover image with a woman”.

An hour before his death, the seer had also shot a video on his mobile, police said. The allegations in the 4min 30sec video are similar to what he wrote in the suicide note.

The three religious leaders were arrested a day after his death.

In the video, Narendra Giri reportedly said, according to sources, that he was so upset that he saw no purpose in living.

“I would like to thank the Chief Minister for handing over the matter to the CBI. I want to ask the Home Secretary to order the CBI to immediately take over the case,” Kailashanand Brahmachari said, leader of Niranjani Akhada, one of the voters of Akhada Parishad, told reporters Thursday.

The Akhil Bharatiya Akhada Parishad is one of the largest religious bodies of saints in the country.