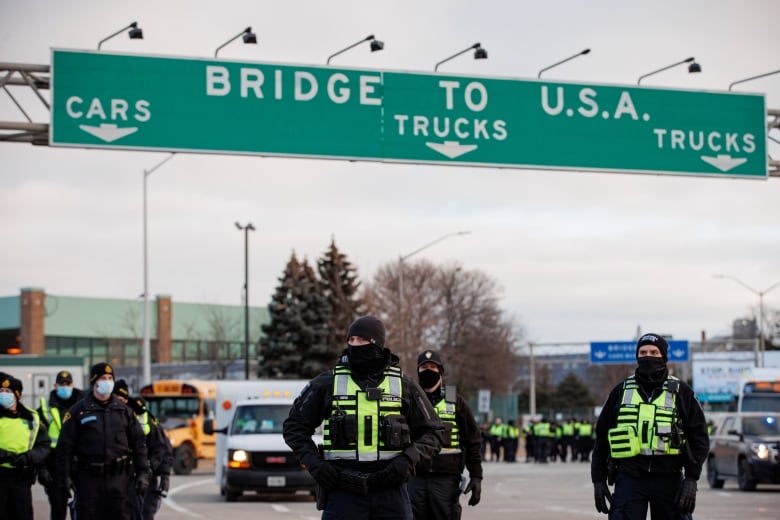 The Canada Border Services Agency feared last winter’s border blockades could pose a “threat to Canada’s economic security and prosperity,” according to documents filed during its investigation into the emergency bill.

The threat assessment was found in a CBSA situation report dated Feb. 14 — the day the federal government invoked the emergency law.

There has been a significant operational impact that could result in a threat to Canada’s economic security and prosperity.

The CBSA compiled situation reports every day between January 27 and at least February 14, listing protests at border crossings, including at the Ambassador Bridge in Windsor, Ontario, and the crossing at Coutts, Alta.

A package of those situation reports was made public as part of the Emergency Commission Public Order.

The February 14 report is the only situational report to contain the rule. The other reports consistently reported that no credible threats had been identified to any of the ports of entry and that overall threats to personnel and infrastructure were low.

Lawyers for the Commission asked former CBSA president John Ossowski why that line was not included until the February 14 situation report when he sat for an interview in August.

A summary of that conversation was made public on Wednesday.

Ossowski, who has since retired, said he didn’t know.

Another CBSA official, Christine Durocher, told the committee that the line about an economic threat may have been erroneously omitted from previous situation reports. Durocher is the regional director general of the CBSA in southern Ontario.

“The interviewees did not know whether the change was related to the federal government’s decision to invoke the Emergency Act,” the interview summary read.

The commission is assessing whether the federal government passed the legal threshold last winter to invoke the emergency law to clear Ottawa of protesters.