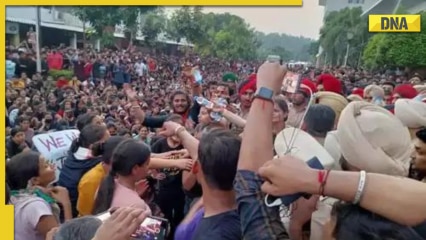 On Sunday, a student and her boyfriend from Shimla were arrested in connection with the alleged ‘leak’ of abusive recordings from the campus of Chandigarh University. Mass demonstrations broke out on campus when students claimed that “private” and “offensive” recordings of many female hostel inmates had been posted online.

The students claimed that recordings of about 60 girls bathing in the hostel had been released. The varsity, on the other hand, released a statement claiming that only one video has been distributed. In addition, it was captured and shared by the suspect. They said the girl took the video and shared it with a friend in Himachal Pradesh.

Girls have climbed the gate to get outside the hostel to protest the filming of private videos and demand a fair investigation. They were locked inside. pic.twitter.com/vEp0FcCsAn— Sandeep Lubana (@PunYaab) September 18, 2022

The 23-year-old suspect, a resident of Rohru, has been handed over to Punjab Police.

ALSO READ  78-day salary as a party allowance for railway employees? The BIG decision of the center is expected today

Students, on the other hand, indicated that they would only engage in conversation with the vice chancellor if they could do so freely in public. Students also claimed that the police used excessive force against the students who protested.

A university student alleged that the director was misbehaving and tried to disperse them as they protested. Students also claimed that the accused received protection from university authorities, despite several complaints against her.

Meanwhile, Dr RS Bawa, pro-chancellor of the University of Chandigarh, said that “no videos have been found of a student who is objectionable, except for a personal video taken by a girl and shared by herself with her boyfriend.”

In the latest development, students have apologized to management.