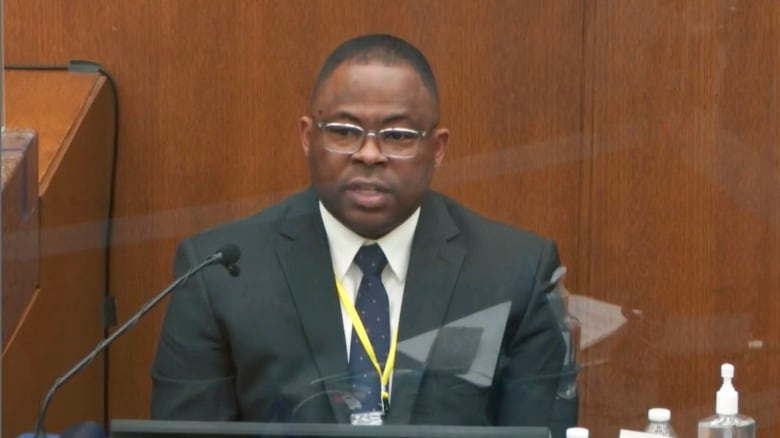 Senior Minnesota state investigator George Floyd changed his testimony at Derek Chauvin’s trial on Wednesday, telling the court he now believed Floyd said, “I don’t do drugs,” not “I ate too many drugs,” when he was arrested in May 2020.

Senior Special Agent James Reyerson of the Minnesota Bureau of Criminal Apprehension initially agreed with Floyd’s defense attorney that it looked like Floyd said in a police body camera video released in court on Wednesday. District of Hennepin County in Minneapolis.

But after listening to a longer version of the recording, Reyerson said he thought Floyd was actually saying, “I don’t do drugs.”

Floyd, a 46-year-old black man, died on May 25, 2020, after Chauvin, who is white, pressed a knee to Floyd’s neck and back for about nine minutes as two other officers held him down. Video of the arrest captured by a spectator sparked widespread outrage, sparking protests in the United States and around the world.

Drug use, a key issue in the trial

The issue of Floyd’s drug use is important to Chauvin’s defense. The prosecution says Chauvin pressing his knee into Floyd’s neck caused his death. But the defense contends that Chauvin did what his training taught him and that it was a combination of Floyd’s underlying medical conditions, drug use, and the adrenaline circulating in his system that ultimately got him. kill.

Floyd had been detained outside a convenience store after being suspected of paying with a fake bill. The four officers were subsequently dismissed.

WATCH | The investigator tells the jury what he heard Floyd say on video:

Prosecution witness James Reyerson of the Minnesota Bureau of Criminal Apprehension told trial jury Derek Chauvin that he could hear George Floyd say on police camera video, “ I ate too many drugs ” . 0:07

Nelson played a clip of the body camera video of J. Alexander Kueng, one of the four officers involved in the arrest and subsequently fired, and asked Stiger if he could hear Floyd say, “J ‘ate too many drugs’ like he was. handcuffed and lying on the sidewalk, pinned down by the officers.

Stiger replied that he couldn’t make out those words in the pictures.

Nelson later attempted to obtain confirmation of the comment during Reyerson’s cross-examination. Nelson reread the clip and asked if it sounded like what Floyd had said, “I ate too many drugs.”

After a short break, Reyerson was questioned by prosecutor Matthew Frank and told the court that during the break he was able to watch a longer version of the clip which included a discussion by officers about Floyd’s potential drug use.

WATCH | The investigator returns to the testimony:

James Reyerson of the Minnesota Bureau of Criminal Apprehension looks back on his previous testimony, saying he believed George Floyd told officers “ I don’t do drugs. ” 0:16

“Having heard that in context, were you able to say what Mr. Floyd was saying over there?” Frank asked Reyerson after the clip was played again in court.

Chauvin was responsible for reassessing the use of force: expert witness

Earlier today, the court heard Stiger, appearing as a paid prosecution witness providing expert testimony on the use of force, say that Chauvin had a responsibility to reassess pressing his knee against the neck. of Floyd when they met as a 46-year-old black man was clearly “deteriorating.”

Stiger had testified the day before that the pressure on Floyd was excessive and could cause positional asphyxiation and result in death. On Wednesday, he reiterated that the force used by Chauvin against Floyd was “not objectively reasonable”.

Prosecutor Steve Schleicher asked Stiger if Chauvin had an obligation to take into account the distress Floyd displayed when considering continuing the type of force he applied.

“Absolutely. Over time … his health deteriorated,” Stiger said. “His breath was diminishing. His tone of voice diminished. His movements were starting to stop.

During cross-examination, Chauvin’s attorney asked a question he posed to other witnesses – whether there are times when a suspect can fake the need for medical attention. Stiger agreed there was.

But when asked by the prosecutor if an officer could “choose not to believe” the detained individual, Stiger said that an officer is still obligated to believe them.

Stiger also testified that Chauvin knelt on Floyd’s neck or neck from the time officers put him on the ground until the paramedics arrived.

“Did that particular strength not change during the entire period of restriction?” Schleicher requested as he showed the jury a composite image of five photos taken from various spectator and body cam videos of the arrest.

But Nelson was able to convince Stiger to agree to a number of statements. Stiger agreed with Nelson, for example, that an agent’s actions should be viewed from the perspective of a reasonable agent at the scene, not in retrospect.

He also agreed that a safe situation can suddenly escalate and a person in handcuffs can still pose a threat to an officer.

Stiger also agreed that when Chauvin arrived at the scene and saw officers struggling to get him into the back seat of the team car, it would have been police policy guidelines for Chauvin to knock him out. Floyd with a Taser.

And he agreed with Nelson that sometimes the use of force “sounds really bad” but is still legal.