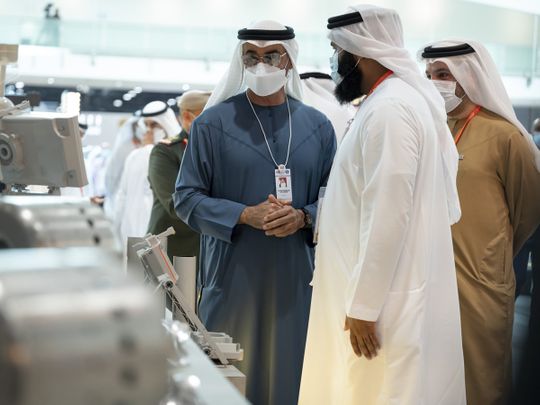 Abu Dhabi: His Highness Sheikh Mohamed bin Zayed Al Nahyan, Crown Prince of Abu Dhabi and Deputy Supreme Commander of the Armed Forces of the United Arab Emirates, today continued his visits to the Exhibition and the International Defense Conference ( IDEX 2021), convened at the Abu Dhabi Center National Exhibition (ADNEC) from February 21 to 25.

Sheikh Mohamed visited a number of companies participating in the global event and was briefed on the latest military and defense systems, products and solutions on display.

He also visited the Maritime Safety Fair (NAVDEX), which is held on the sidelines of IDEX 2021, as well as the pavilions of the Economic Council of Tawazun, Saudi Arabia and the Republic of Serbia in addition to the stands from several other countries participating in the event.

Cheikh Mohamed exchanged during his tour with exhibitors and participants on the importance of such events to promote their companies and shed light on the latest defense products and solutions and their future projects in this field.

All permits for Ramadan tents and canceled iftar gatherings in Ajman