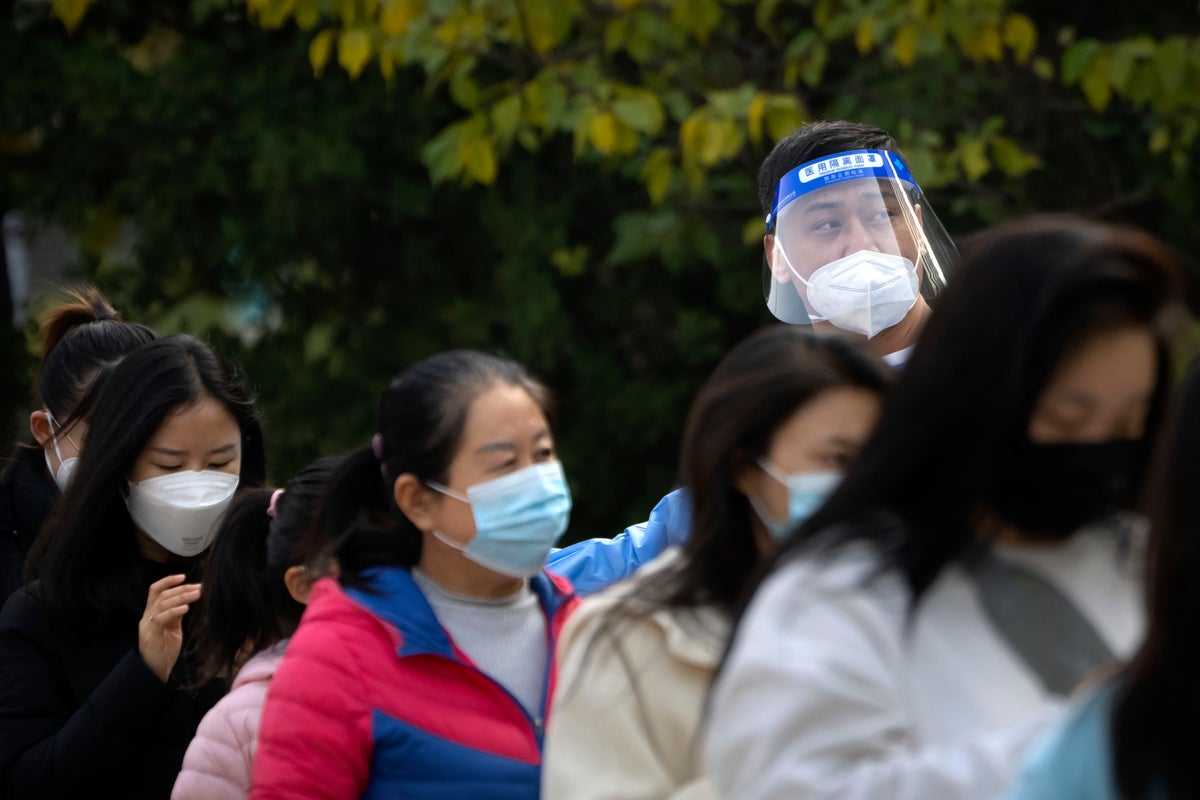 The Chinese capital Beijing has closed city parks and imposed other restrictions as the country faces a new wave of COVID-19 cases.

Elsewhere, more than 5 million people were in lockdown in the southern manufacturing hub of Guangzhou and the western megacity of Chongqing on Friday.

The country reported 10,729 new cases on Friday, almost all of which tested positive without showing symptoms.

While most of Beijing’s 21 million people were tested almost daily, an additional 118 new cases were registered in the sprawling city. Many city schools switched to online classes, hospitals restricted services and some shops and restaurants were closed and their staff was quarantined. Videos on social media showed people in some areas protesting or fighting with police and health workers.

Chinese leaders pledged on Thursday to respond to public frustration over the severe “zero-COVID” strategy that has locked millions of people to their homes and severely disrupted the economy.

No details were offered other than a pledge to release “stranded people” who have been quarantined for weeks or blocked from leaving towns where there have been cases.

“Zero-COVID” has kept the infection rate in China relatively low, but weighs on the economy and has disrupted life by closing schools, factories and shops or shutting down neighborhoods without warning. With the new wave of cases, a growing number of areas are closing businesses and imposing restrictions on movement. To enter office buildings, shopping malls and other public places, people have to show a negative result of a virus test once a day.

With economic growth slowing again after recovering to 3.9% from a year earlier in the three months ending in September, forecasters had expected bolder steps towards reopening the country, whose borders remain largely closed.

Communist Party president and reigning leader Xi Jinping is expected to make a rare trip abroad next week, but has offered little indication of backtracking on policies the party has closely associated with social stability and the superiority of its policies. .

That has been upheld by the Politburo’s seven-member Standing Committee, which was appointed in October at a party congress that also extended Xi’s political dominance by appointing him to a third five-year term as leader. It is full of its loyalists, including the former Shanghai party chief, who enforced a draconian lockdown that caused food shortages, closed factories and locked millions of people at their homes for two months or more.

People from cities with a single case in the past week are not allowed to visit Beijing, while travelers from abroad must be quarantined in a hotel for seven to 10 days – if they are able to complete the timely and opaque process of obtaining a to go through a visa.

Business groups say this discourages foreign executives from visiting, prompting companies to move investment plans to other countries. Visits by US officials and lawmakers tasked with maintaining critical trade ties amid tensions over tariffs, Taiwan and human rights have virtually ground to a halt.

Last week, access to part of the central city of Zhengzhou, home to the world’s largest iPhone factory, was suspended after residents tested positive for the virus. Thousands of workers jumped fences and ran along highways to escape the factory of Taiwan’s Foxconn Technology Group. Many said that sick colleagues received no help and that working conditions were unsafe.

Also last week, people posted outraged comments on social media after a 3-year-old boy, whose residence in the Northwest was quarantined, died of carbon monoxide poisoning. His father complained that guards who enforced the closure refused to help and tried to stop him when he rushed his son to a hospital.

Despite such complaints, Chinese citizens have little to say about policymaking under the authoritarian one-party system that tightly controls the media and public demonstrations.

Speculation about when the measures will be relaxed have centered on whether the government is willing to import or domestically manufacture more effective vaccines, with the elderly population remaining particularly vulnerable.

That could happen as early as next spring, when a new batch of officials will be appointed under Xi’s continued leadership. Or, restrictions could last much longer if the government continues to reject the idea of ​​living to learn with a relatively low number of cases causing far fewer hospitalizations and deaths than when the pandemic was at its peak.