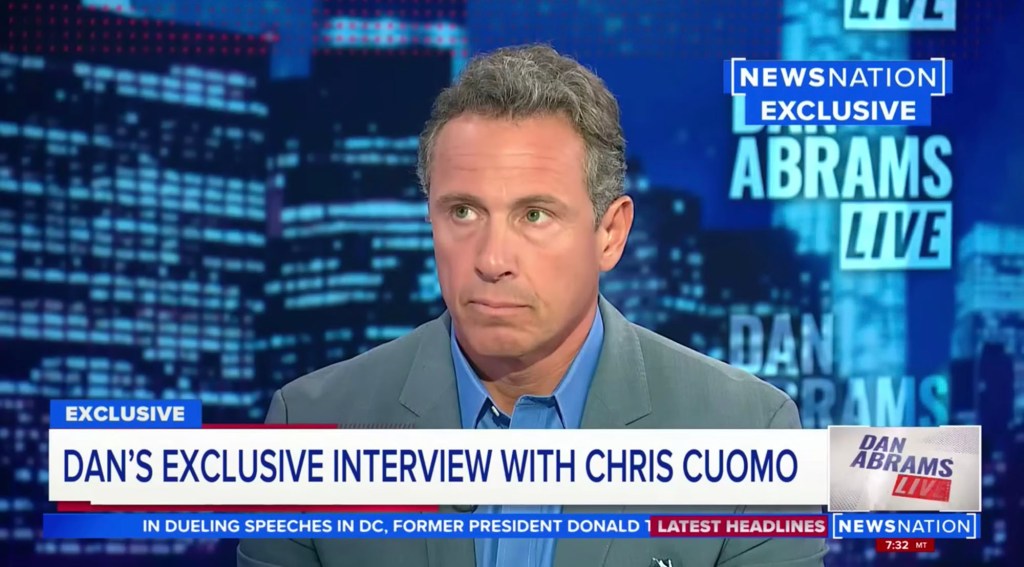 Chris Cuomo says his former CNN colleagues Jake Tapper and Don Lemon should have gone to greater lengths to contact him after the host of “Cuomo Prime Time” was fired from the cable network last year.

Cuomo, who broke his silence on his ouster from the struggling network earlier this week, announced that he has signed up to anchor a show with smaller rival NewsNation.

In an interview with NewsNation’s Dan Abrams on Tuesday, Cuomo was asked if Tapper and Lemon “came out aggressively” against him.

“I can’t blame people for acting on what they’ve been told,” he said of Lemon and Tapper.

‘Should they have called me? Naturally. But I also understand the circumstances.”

Cuomo continued: “I understand why they may not have felt that was an option. But these are good people.”

“They take their job seriously. I’m not going to judge them for what they say about me based on what they did and didn’t know.”

Cuomo was fired from CNN last year after it was revealed that he had taken an active role in advising his brother, then-Governor of New York, Andrew Cuomo, on countering sexual misconduct allegations made against him by former aides. .

Weeks later, Cuomo’s boss at CNN, Jeff Zucker, resigned after it was revealed he was in a consensual relationship with his top marketing officer, Allison Gollust.

Cuomo then filed a $125 million claim against CNN after the network refused to pay out the remaining $18 million on his contract. The case is in arbitration.

Lemon reportedly came out against any kind of cash settlement between CNN and Cuomo.

“Have you thought about what message it sends to the journalists in this company and to the wider public that someone can be found to break those journalistic standards and then get paid handsomely for it?” Lemon would have said. His comments were solicited by Insider.

The lawsuit against CNN alleges that big names at the network, including Lemon, have conducted a “smear campaign” against Cuomo.

Cuomo said he has been the victim of double standards since CNN Lemon failed to punish Lemon for mentoring Jussie Smollett, the actor convicted of making up a story that he was beaten by Trump supporters in a racially motivated attack.

The lawsuit against CNN mentions the fact that Smollett testified that he was warned by Lemon that the Chicago police did not believe his accusations of a hate crime.

“Intervening in the ongoing investigation by texting Smollett was an unforgivable breach of ethics,” the filing argued.

“Yet CNN did nothing. Lemon was not disciplined in any way.”

In February, Tapper accused the network’s parent company of throwing Zucker in front of the bus after he refused to capitulate to Cuomo’s demands.

ALSO READ  Joe Biden: 'We will not enter a recession'

Tapper said the chief executives of WarnerMedia, the AT&T subsidiary that owned CNN before its parent company merged with Discovery, forced Zucker to leave after Cuomo “threatened to blow up the network.”

Even before Chris Cuomo’s impeachment, Tapper publicly called out his then colleague for inviting his brother to his show to conduct softball interviews during the coronavirus pandemic.

In the early days of the lockdown, Andrew Cuomo was praised by many for handling the state government’s response to the pandemic.

“I can’t imagine a world where someone in journalism thinks that was appropriate,” Tapper said.

“Chris said in his apology that he got airborne, that he put us in a bad place. I agree with that too.”