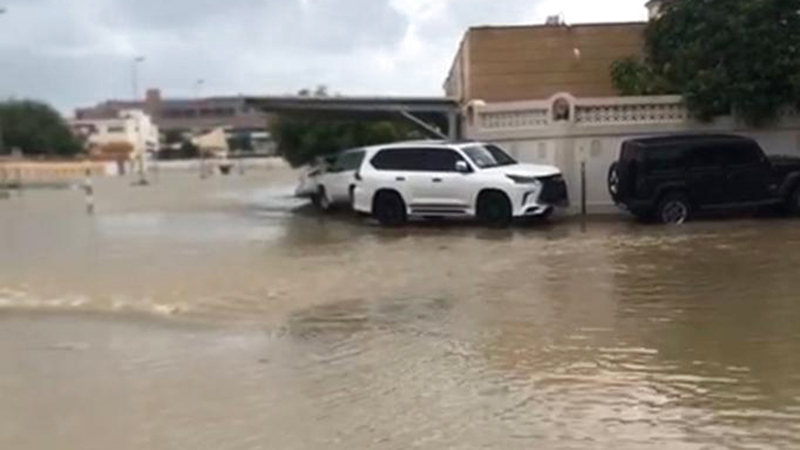 The depression witnessed by the country two days ago led to heavy rains in the eastern region and the accumulation of water on the roads as a result of entering valleys and rising sea levels, which paralyzed traffic and the drift of large numbers of vehicles, which called on a number of citizen families to show attitudes that express their Emirati authenticity and community solidarity, by opening the doors of their homes to house families, feed them, and provide them with the necessary support.

Families whose vehicles were swept away by severe torrential torrents, and prevented them from reaching their homes, thanked the citizen families in the Emirate of Fujairah, who sheltered them, brought them into their homes, opened councils for them, provided water and food, and provided them with adequate support until they were sheltered by the responsible authorities.

Citizen Saqr Yousef Ali Yousef Al Hammadi, from the city of Khorfakkan, said that the torrential torrents prevented him from returning to his home in the city of Khorfakkan, during his return from work in the Emirate of Fujairah, due to the closure of the roads leading to the city, as a result of the accumulation of rain water, which forced him to return to Fujairah, but he was also unable to do so, due to the flow of large amounts of rainwater.

Al-Hammadi continued: “In the meantime, a citizen of the Emirate of Fujairah, Saeed Al-Zahmi, came to me and invited me to his house until the unstable weather situation subsided.”

He added: “I responded to his call, and when we got to the house, I was surprised that there were four families who preceded me to his house. He gave her food, blankets and everything she needed.” Citizen Saeed Al-Zahmi said: “We are the sons of Zayed, and this is what the late Sheikh Zayed bin Sultan, may God bless his soul, taught us.”

He added: «As soon as I found families stuck in the rain, I provided them with assistance and care, especially since there are elderly people and children. I did what my duty dictated, which any citizen or resident who lived on the land of the Emirates would have done.”

He assured the assistance of the people of the area to move their vehicles to a higher bank of the street, and to transport the people from the rain-affected areas to his house to provide them with assistance and assistance.

Khalifa Al Mazrouei from Al Ain city said: “I was coming to see the rain in the eastern region, and to enjoy the good weather, but I did not expect the intensity of the rain. Citizens take me out of the vehicle, and take me and my family in someone’s house.”

He pointed out that the owner of the house sheltered two other families, opened the council for them and provided them with food and water.

He said: “His generous chest made me forget the worries of what happened to me and my family.”

And Abdulaziz Hosam stated that he was coming from the Emirate of Sharjah when he got stuck among the accumulated waters of the valleys. He said: “I, my wife and my child, who is of determination and no more than six years old, and my two-year-old daughter, were surrounded by water on all sides, but the Emiratis took the initiative to get us out of the vehicle and provide the necessary support to us.” We were surprised by one of the female citizens from Fujairah, inviting us to enter her house.”

“It provided us with everything we needed until the situation calmed down and the responsible authorities transferred us to the place designated for shelter,” he added.

Stuck in the rain, they thanked the citizen families who sheltered them.