Speaking at a funeral on Sunday, Sept. 11, the governor, a close ally of Azimio leader Raila Odinga, claimed that the seven-judge bench had reached a political verdict at a time when the country needed an objective one.

The Senior Counsel, who led Odinga’s legal team during the presidential petition game, also questioned the independence of the highest court in making the ruling.

“Chief Justice Koome, you have disgraced the judiciary by passing a verdict that, in the eyes of the commoners, who fought for you to ensure that a Chief Justice can become independent. You have the people of the Republic of Kenya disgraced!” he claimed.

The governor of Siaya accused the highest court of a covert vendetta in the ruling, which unanimously ignored all nine issues raised by Azimio la Umoja’s legal team.

Orengo, a former senator and former politician, also questioned the choice of words when pronouncing the verdict, noting that there was no need to use some of the remarks when making such a statement.

“The person who wrote that verdict has done a huge injustice to the rule of law. I respect the court and I have worked as a lawyer for a very long time. Many of the judges in the Supreme Court are my juniors.”

“Judges speak in words that are measured so that even the loser in a court feels that justice has been done. not even one baraza chaired by a Chief would use the kind of language used at the Supreme Court. Shame on you judges!” he noticed.

However, Orengo confirmed that they would go ahead and continue the fight to ensure justice is served.

“But what gives me peace is that we will fight and fight until justice is done… We are not afraid to keep fighting… This is a battle we must win.”

The apex court has come under fire from the Azimio la Umoja coalition for discarding all nine issues and then labeling some of the evidence presented as hot air and giving the judges a wild chase.

President-elect William Ruto will take over the instruments of power at Kasarani Stadium on Tuesday, September 12. 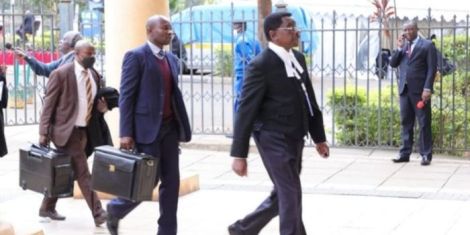 Senior Counsel James Orengo will arrive at the Supreme Court on Wednesday, August 31, 2022.