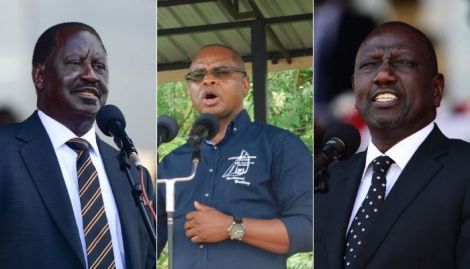 Tinga stated that he decided to support PAA because he agreed with his vision to transform Kilifi County.

“That is his agenda and that is my agenda. For that reason, when we come together, we will work together and deliver,” said Tinga.

The Kilifi gubernatorial election has turned out to be a power struggle between the Kenya Kwanza Alliance and Raila Odinga’s Azimio, which enjoys massive support in the province and region.

Micheal Tinga’s move to step down for PAA candidate George Kithi is seen as a blow to UDA Aisha Jumwa, escalating sibling rivalry within Ruto’s camp.

Pamoja African Alliance Amason Kingi was initially in Azimio but got into a fight with Odinga before joining Kenya Kwanza’s Ruto.

PAA party leader Amason Kingi is serving his second and final term and is counting on his influence to change the election results in Kithi’s favor.

The sibling rivalry in Kenya Kwanza is a major headache for Ruto, who has openly supported Jumwa in the presence of Kingi, a second-rate coalition director.

However, Tinga insisted he supported Kithi for the good of the province ahead of the August polls.

Kilifi’s governor candidates are endearing themselves to the electorate with promises to renew the fishery, promote the blue economy, education, health and fight poverty.

Other candidates in the race include Alphonce Dzombo Mbaru of Safina Party and Franco Esposito, an independent candidate. 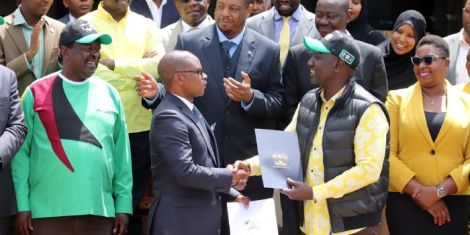 Governor of Kilifi, Amason Kingi (center) will be officially welcomed by DP William Ruto in Kenya Kwanza at his office in Karen on Tuesday 10 May 2022.