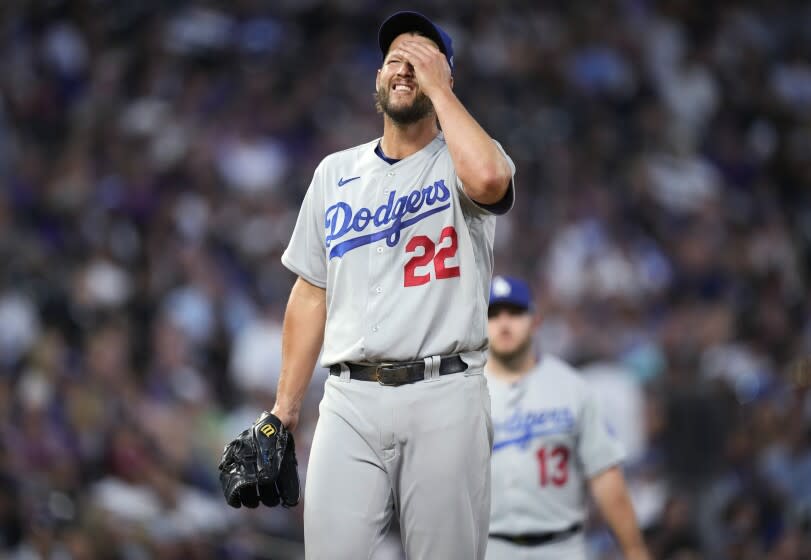 For five innings on Saturday-evening, Clayton Kershaw navigated both a last place opponent, the high-altitude elements and a rapidly increased number of pitches.

Despite giving up two unearned runs in the first inning, he had kept the Colorado Rockies quiet in the next four as the Dodgers took a lead at Coors Field.

In the bottom of the sixth, however, it appears that only seven pitches will bring his outing to a whooping end.

The Rockies hit back-to-back singles against his curveball. They pulled forward with a two-run triple and an RBI single on consecutive first-pitch sliders.

Suddenly the Dodgers were trailing and manager Dave Roberts headed for the mound.

Kershaw’s evening was over. In an eventual 5-3 loss, the Dodgers would not take the lead again.

“In general, I thought my stuff was okay,” he added. “Could regroup after that [first inning] and get through the next few innings quite easily. And then, yeah, that sixth inning, I felt good about it, it just kind of got away from me there. ”

The first hit was the one Kershaw most regretted, a curveball for Brendan Rodgers that “probably kind of came back to him,” Kershaw said, breaking a stretch in which he knocked out 13 of the previous 15 since the start of the second. collection.

José Iglesias put runners on the corners in the next at bat by dumping a low curveball into the right.

Then came the two throws that changed the game: a backdoor slider to Randal Grichuk who faced the other way for a two-run triple, and a slider on the knees to Elias Díaz who was wheeled to the left to make it 5-3.

“The two sliders were probably, I thought, well placed and decent,” Kershaw said. “But maybe I’d done the same too many times. They put good swings on them. Hit them hard. So that was the frustrating part.”

Just reaching the sixth inning was a challenge for the lefthander, who threw 29 pitches in a first inning that was extended by Max Muncy’s two-out error on third base.

That miscue, on an Iglesias bouncer looking off Muncy’s arm in left field, was Muncy’s third foul in the last eight games and one of many balls he couldn’t think of this weekend.

However, Roberts downplayed any defensive concerns for the third baseman.

“He turned around, I think an inning or two later and made some really nice plays,” said Roberts. “So Max plays a good defense. I know there’s been a few plays in the last ten days that I think we’d like him to come up with.”

After opening the score in the top of the first inning on a Will Smith RBI-double, they re-took the lead with two runs in the third on a Trea Turner homerun – making his 16th of the year to take his hit streak to 17 games – and a Hanser Alberto RBI single.

The offense then cooled off and went scoreless in the last six innings for a second night in a row.

Kershaw, meanwhile, suffered his second bumpy start against the Rockies (46-56) at Coors Field this year – a place where he now has a personal worst 4.82 career ERA.

“I just don’t think about it,” Kershaw said when asked about his Coors Field woes. “Just try making pitches. I don’t let any margin dictate how I feel about how I threw. I’m not that weak mentally. You just have to pitch, and if you don’t pitch well, you have to admit it.”