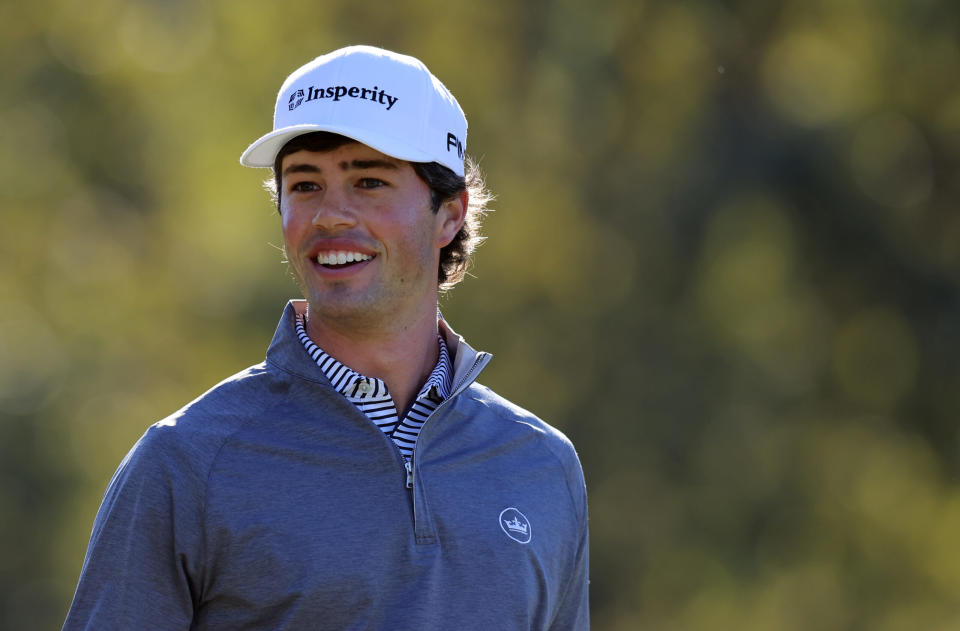 ST. SIMONS ISLAND, GA – After making his first professional appearance on the PGA Tour last week in Houston, Cole Hammer takes advantage of a sponsor’s waiver for the RSM Classic and takes the lead in the first round by scoring nine birdies for a career low 8-under 64 on the Plantation Course at Sea Island Resort.

“I almost fainted there for a second,” Hammer said. “It went by in the blink of an eye, but at the same time it was a long day.”

And an unusually cold one. The temperature at the Seaside Course barely rose above 50 degrees on Thursday. Having previously played in the Jones Cup, an amateur tournament held in nearby Ocean Forest, Hammer had seen the wind blow into these parts of the water and bunch up in four layers and a beanie.

“When I played the Jones Cup it was 35 degrees, the wind was 30 and it was raining, so I told myself I will never play in weather like that again,” he said. “I was ready.”

What Hammer wasn’t ready for was six consecutive missed cuts to begin his pro career, an unexpectedly sharp learning curve after an award-winning amateur career that was crowned by leading the University of Texas to a national championship in June.

“It was a really dark period and I didn’t know what was going on,” he said. “I put so much pressure on myself early in the tournament that I would get behind the 8-Ball.”

After missing the cut at the Wyndham Championship in August, he took a deep dive on his swing with instructor Bruce Davidson and is starting to see the fruits of their labor. Ten days ago, he narrowly missed securing guaranteed starts in the final leg of Korn Ferry Tour Q-School and then opened with a 74 at the Cadence Houston Open.

“I just had almost zero patience. As soon as I made a bogey, I felt like the world was ending,” he explained. “In Houston I just relaxed, took a deep breath and did some bogeys. I basically just told myself I can come back and no one plays perfect golf and that’s what I was trying to do.

Hammer shot 65 in the second round to make the cut, finishing T-27. It gave him a jolt of confidence, especially when he found out after his last lap that he had landed a sponsor invitation to the RSM Classic.

“I hit zero on the PGA Tour. I had to get that monkey off my back,” he said. “To do that at the Houston event in my hometown was huge for me.”

Hammer noted that he hadn’t slept well on Wednesday night and started his round with low expectations.

“I hit my best drive of the day on No. 1, my 10th hole, and that swing gave me some confidence to go into the back nine. I hit a wedge about two feet and smashed it in,” Hammer said.

That was his fifth birdie of the day and before long he looked up and saw his last name at the top of the leaderboard.

“I saw some cameras come out, I knew I was doing something right,” he said.

Hammer’s opening round 64 was one stroke better than rookie Ben Griffin, who also played the Plantation Course. England’s Callum Tarren, who said the weather reminded him a little too much of home, and Beau Hossler tied for the day’s low round at the Seaside Course at 6-under 64s.

Hossler, a 27-year-old Texas graduate still chasing his first Tour win, said he can relate to Hammer’s slow start in the pro ranks and expects to turn the corner — maybe even this week.

“He’s probably had a bit of a hard time since turning pro but you know what, I don’t care what level you play at, it comes with ups and downs. I’ve had it in my career, every player here has it “I think there’s a learning curve and once he’s comfortable at this level, like me, I think you’re starting to say I can compete with these guys. He certainly has the ability and competitive nature to do that. It’s just a matter of getting him experience, getting comfortable, getting confident and then honestly just playing well and popping out at the right time.”

Sepp Straka makes the most of Tiger Woods withdrawal, after opening round of Hero World Challenge tied