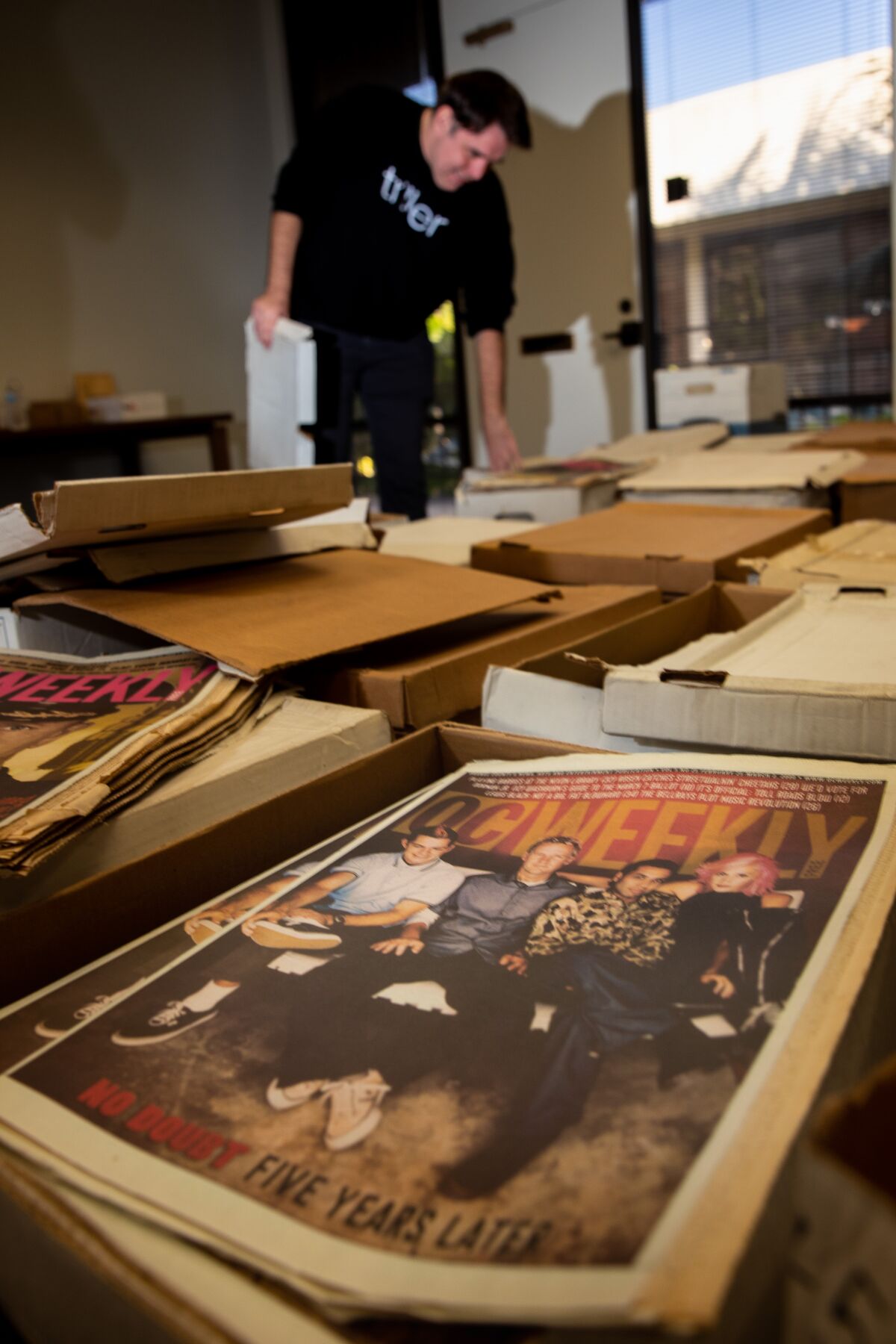 The fluorescent lights were bright and stark in the bare office near Irvine’s John Wayne Airport where I met LA Weekly publisher Brian Calle.

It felt like a morgue because it was: before us lay the corpse of my journalistic past.

Scattered across the floor were boxes of the entire circulation of OC Weekly, the alternative newspaper that shut down the day before Thanksgiving in 2019 after 24 years of comforting the afflicted and tormenting the comfortable in a region that certainly needs it.

Here I started my career in 2000 as a freelancer with no previous journalistic experience. I rose through the ranks to become a reporter, food critic, columnist, editor-in-chief, podcast host, and eventually editor-in-chief until I resigned in 2017 rather than lay off half the staff as then-owner Duncan McIntosh demanded.

When I left, OC Weekly occupied an entire warehouse and office space in Fountain Valley. We told stories no one else would and held parties and festivals like no one else could. The weathered boxes were all that remained of a once proud operation.

They now belong to Calle, who invited me to talk about how he wanted to bring it back from the dead – and help him figure out what was what.

We played an impromptu game of Whac-a-Mole: I saw a cover of a previous issue and immediately mentioned the story behind it.

The one with an illustration of former Orange County Sheriff Mike Carona with his wife and girlfriend at a movie theater? Then we celebrated his conviction for corruption for our reporting. The beautiful photo of chilaquiles? Our chilaquiles issue, of course. Hitler giving a Sieg Heil salute with a bass on his chest? When we went out to a nightclub in Anaheim that had secret neo-Nazi rock shows.

“Wow, you really know your stuff!” Calle said, impressed. The compliment didn’t sweeten the bitter pill I now had to swallow.

When I left OC Weekly, I made peace with what happened. When it closed, my former colleagues and I grieved and moved on.

So why did anyone have to try to bring it back?

And why did it have to be it?

Calle made national headlines — and not in a good way — when he and a group of investors bought LA ​​Weekly in 2017 and summarily fired nearly everyone. OC Weekly had long dismissed the former head of the Orange County Register editorial page as a hacker who somehow always failed, and his purchase of our former sister paper confirmed this.

He didn’t turn LA Weekly into a right-wing rag like critics claimed he would. He fared worse: It’s now a journalistic sideshow about the size of a supermarket mailer.

Unsurprisingly, my former OC Weekly colleagues weren’t thrilled when I told them that Calle had bought our beloved rag late last year. Responses ranged from “No” to “Hell no” to unprintable stuff.

My feelings were more like those of Nick Schou, who succeeded me as editor-in-chief and remains a good friend.

“Good for him for getting the barnacle remains off the paper [McIntosh’s] greedy grasp,” he told me. “But will OC Weekly be better off freed from Davy Jones’ locker, only to be added to Calle’s portfolio of once-powerful but now skeletal sibling papers?”

I told Calle that while I appreciated his intent, it was better to leave OC Weekly buried in the graveyard of failed publications.

Calle, imperturbable except for a laugh that falls somewhere between a scream and a sigh, disagreed.

“There’s an emptiness and a hunger for something different,” he said. “The Weekly can satisfy that hunger.”

Yes, but why not start something new? Or expanding his own Irvine Weekly, which Calle started in 2018 in a feeble salsa attempt to pry advertisers away from OC Weekly and whose office we spoke to?

“I respect it,” he countered. “The Weekly would write the stories no one else would. The Weekly was at the forefront of what became OC.”

ALSO READ  Family teams up to save injured swan in Shrewsbury

In addition to LA Weekly and OC Weekly, Calle’s company, Street Media, owns the legendary Village Voice — also shuttered and then revived — in New York City, 10 other community newspapers across the country, and recently launched the lifestyle magazine for women Bust over. He said his mini-empire is “modestly profitable” but declined to release numbers. He sees an opportunity with OC Weekly.

In a region of 3.1 million people, a region largely ignored by the LA media and with few local news outlets, the closure of OC Weekly left a news gap that no one bothered to fill and a legacy that people just begin to appreciate. When I started there, the Register and the Orange County Bureau of the LA Times employed hundreds, with us as the foul-mouthed arrivist. The media wars were fierce and the county was better off at it.

Today the Register is a shell of what it was, and The Times sold its OC offices long ago. If Calle could channel an ounce of what OC Weekly once was, I told him, that would be a good thing. But if he brought it back as a sad parody of what it once was, he’d be ridiculed – and I’d lead the scorn.

“Everyone who knows me says I’m a fixer,” he said, brushing me off from the personnel files I found among the archives. “And journalism has become my fixer project.”

Norberto Santana Jr., publisher of the Voice of OC, welcomed the potential rebirth of OC Weekly, adding, “The Weekly had a special finger on the pulse of the county. It was much appreciated and much needed.”

But he also warned that Calle has a huge task ahead.

“You’re not just going to replace something old,” Santana said. “You will be replacing a group of reporters who have left an indelible mark on the county. Can [Calle] meet that high mark?

Calle tried to buy OC Weekly just before it closed, one of several potential buyers who circled the paper in its refusal. He didn’t go for it then, he said, because of the “tumult” after he took over LA Weekly, including advertisers pulling out, social media shaming those who continued to work for them and even a public funeral held by former staffers outside newspaper offices.

“If I bought [OC Weekly] and made the necessary changes,” Calle said, “I would have received an unfair backlash. I don’t mind, but I didn’t need my team to go through that again.”

He reached out to McIntosh, a boat show magnate who bought OC Weekly in 2016 during the pandemic. In November, they finally struck a deal. Calle would not disclose the purchase price or terms. The phone for McIntosh’s company has been disconnected and McIntosh has not responded to an email request for comment.

Todd Stauffer, manager of the Assn. of Alternative Newsmedia, said that in a market like Orange County, a paper like OC Weekly still has a chance, even at a time when news organizations are closing or laying off staff seemingly every week and the very idea of ​​an alt-weekly is archaic.

“If your city or region needs someone to hold the powerful to account and dig deep into important issues, your alt can thrive,” said Stauffer, cofounder of the Jackson Free Press in Mississippi and still involved in community journalism in the Magnolia state. “Have some personality. Mix it. Involve your readers.”

Calle plans to slowly reboot OC Weekly — just one full-time reporter, maybe a few freelancers — then pitch his comeback to advertisers and grow from there. The goal is a daily online presence, quarterly releases and live events.

So how are you going to get advertisers?

“I’ve been trying to get back to Orange County for a while. I still know a lot of people. I knew every player in every industry.”

Most hated OC Weekly, I replied.

Intending to keep the newspaper’s scabrous tone, Calle contacts prospective writers, promising not to import anyone from Los Angeles because “the scenery here is weird.” … We need to find the rioter, the go-to person in OC”

Then he looked at me.