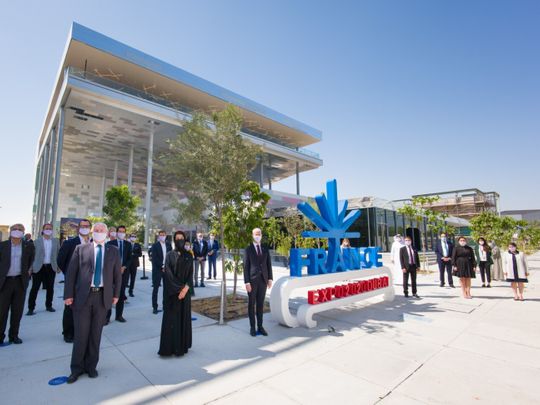 Dubai: The final garden of trees – an acacia arabica – was planted on the promenade of the France Pavilion on Thursday to mark the completion of the pavilion construction at Expo 2020 Dubai.

The event was attended by Reem Al Hashimy, Minister of State for International Cooperation of the United Arab Emirates and Director General of Expo 2020 Dubai Bureau, and Franck Riester, French Minister Delegate for Foreign Trade and Economic Attractiveness , which were welcomed by Erik Linquier, Commissioner General for France. at Expo 2020 Dubai and Chairman of Cofrex (Compagnie Française des Expositions).

According to the organizers, the French Pavilion should unveil the route of its visitors on April 26, before the opening of Expo 2020 Dubai on October 1.

One of the highlights of the French Pavilion is its esplanade promenade which has been designed as a stroll (lounge) and relaxation area for visitors, adorned with endemic trees.

The pavilion was inaugurated in May last year in the presence of Elisabeth Borne, former French Minister of Transport. The architects were Jean-Luc Perez and Bernard Mauplot (Atelier du Prado Architects) and Jacob Celnikier and Pascal Grabli (Celnikier & Grabli Architects).

First in the Arab world

Al Hashimy said earlier: “Hosting the first global exhibition in the region embodies the vision of His Highness Sheikh Mohammed bin Rashid Al Maktoum, Vice President and Prime Minister of the United Arab Emirates and Ruler of Dubai, for the country to become a world center of enlightenment. , creativity, innovation and human coexistence. “

“We’re now a few months away from welcoming the world and launching a platform for collaboration, when it’s needed most. Armed with the UAE’s spirit of hope and optimism, we will work with our partners to deliver concrete solutions to real-life challenges. Expo 2020 will contribute to the strategy of the UAE leadership, strengthening the nation’s position as a country that pushes boundaries and achieves things others deem impossible, ”she added.

Construction of the French pavilion on the Expo 2020 Dubai site is complete.
Image Credit: Dany Eid

Construction of the French pavilion on the Expo 2020 Dubai site is complete.
Image Credit:

Construction of the French pavilion on the Expo 2020 Dubai site is complete.
Image Credit:

Construction of the French pavilion on the Expo 2020 Dubai site is complete.
Image Credit: Dany Eid