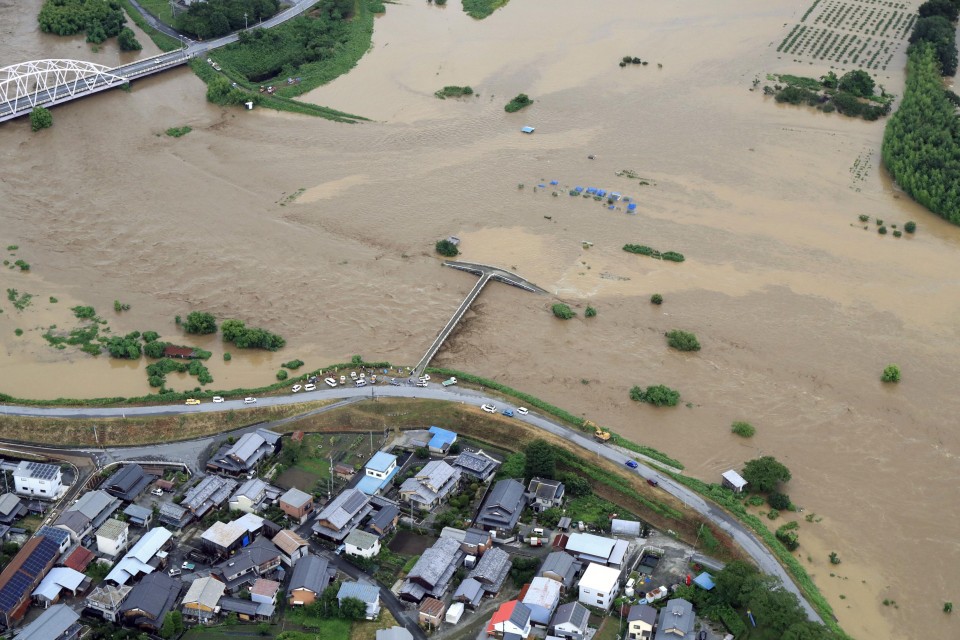 Heavy rainfall continued across much of Japan on Friday, with record showers reported in Fukui and Shiga prefectures as rivers flooded and many areas are at increased risk of landslides.

Fifty-two rivers in nine prefectures had overflowed by 5 p.m. during three days of continued heavy rainfall, the government said. It also said 22 landslides had occurred in six prefectures during the same period.

Photo taken from a TBEN News helicopter on Aug. 5, 2022, shows the Takatoki River in Nagahama, Shiga Prefecture, being flooded by torrential rain. (TBEN)

Japan’s Meteorological Agency is warning residents to be vigilant for further heavy rains through Saturday amid unstable atmospheric conditions that flood the country from west to east.

In response to the damage caused by the downpours, local governments and other authorities are rushing to support residents in places where lifelines, including water, have been severed.

Damage to transportation infrastructure, including two collapsed rail bridges and a landslide blocking part of the Hokuriku Expressway in Fukui Prefecture, has also been confirmed.

Police and other authorities were looking for two people in Iwate and Yamagata prefectures who had been missing since Thursday. In the town of Komatsu in Ishikawa Prefecture, two people were found with hypothermia after appearing to have been submerged in muddy water, the city authorities said.

Minister of Land, Infrastructure, Transport and Tourism Tetsuo Saito said during a news conference on Friday: “We are working to understand the full extent of the damage and will do our very best to respond.”

The rains so far have wreaked havoc on homes in the country’s northeast Tohoku region and the Hokuriku region. Local authorities and the Japanese self-defense force are working to restore the water supply.

ALSO READ  Dollar falls to 132 yen on US recession concerns

On Thursday, about 540,000 residents were called to evacuate at some point due to heavy rain in the northeast and center of the country.

In the 24 hours through 6pm Saturday, up to 60mm of rain was forecast for the Hokuriku region, up to 150mm for the Tokai region of central Japan and 80mm for the Kinki and Chugoku regions in the west.

Heavy rainfall in the Hokuriku region puts a high risk of landslides, according to the weather agency, with atmospheric instability expected to persist in western and eastern Japan through Saturday.