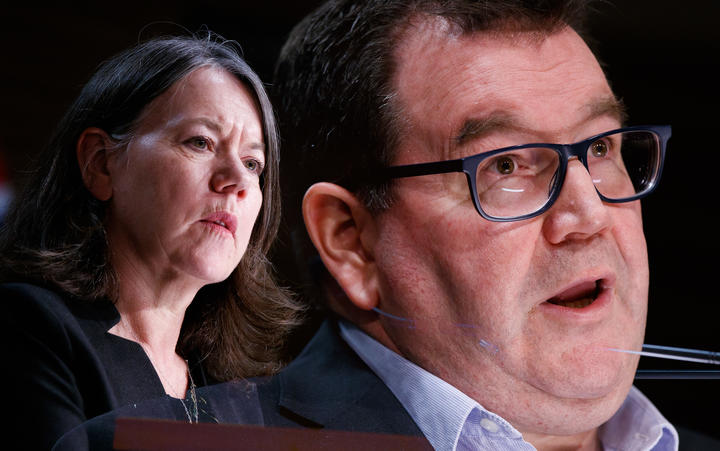 Grant Robertson and Director of Public Health Dr Caroline McElnay gave the latest update on the government’s response to Covid-19.

There have been 71 community cases reported today – all in Auckland – after 55 new cases of Covid-19 were reported in the community yesterday.

Speaking at today’s briefing, Robertson, the increase in the number of cases was not unexpected, “but they are increasing faster” and the government continued to act on public health advice.

“Every day we discuss the cases and the numbers with the public health teams on the ground in Auckland and at the Department of Health. Their advice has not changed. We can actively control this epidemic at Alert Level 3. ”

He said “very few” of the cases originated from transmission in the workplace.

“Where they come from is always in households, some in our health facilities and many in gatherings inside people’s homes. We have also seen this happen at Alert Level 4. and, unfortunately, this continued at Alert Level 3.

“My message today is clear: we need the people of Auckland to adhere to the Level 3 alert rules.”

He said the outbreak was not in a small geographic area, it was affecting people in all parts of the city.

“Which makes everyone’s job in Auckland to help prevent its spread.”

Robertson said New Zealand’s Alert Level 3 was one of the toughest measures in the world and had already worked to contain outbreaks – but Delta was a delicate and difficult opponent.

“It has never been more important to follow the ground rules that we have applied since the beginning of last year when Covid first arrived in New Zealand.

“Treat those around you as if they could have the Covid. Limit contact with others and maintain physical distance. Wear a mask whenever you leave the house. Use the contact tracer app wherever you are. come on. Wash your hands regularly and get vaccinated. It is the best tool we have to protect ourselves from the virus and possibly lower our alert levels. “

Robertson said the first dose number in Auckland was around 87%, but hadn’t budged in the past few days.

The second dose number, at 66%, was increasing, but Robertson said those two numbers needed to reach over 90% to really make a difference in future cases and ensure hospitalization rates stay low.

He also urged people to stay in their bubbles and adhere to safety protocols, which included wearing masks and maintaining physical distance.

“I realize that the longer the restrictions last, the harder it is to maintain our defenses, but it has never been more important to follow the ground rules,” he said.

Dr McElnay said the public health system has the capacity to deal with the number of Covid-19 cases and that she currently sees no pressure in the system.

Yesterday, the government announced that the current Covid-19 Alert Level 3 response in parts of Waikato and Northland will remain for an additional five days. Zones will remain at current levels until at least Monday. Auckland remains at Stage 1 of Alert Level 3.

In Northland, no cases have been reported since two women traveled there from Auckland and tested positive for the virus.

Today, two women who traveled from Auckland to the South Island were arrested in Blenheim and charged with violating a health ordinance.

Police and the Department of Health are investigating how they were able to leave Auckland.

Dame Cindy Kiro is sworn in as Governor General